Natural gas is trending lower on its 4-hour time frame as it formed lower highs and higher lows inside a descending channel. Price is currently bouncing off support and might be due for a pullback to the nearby resistance levels.

Applying the Fibonacci retracement tool shows that the 61.8% level is closest to the channel resistance around $2.500. This is also near the 200 SMA dynamic inflection point, which adds another resistance level at that area. A shallow pullback could already hit a roadblock at the 38.2% Fib around $2.425 mark.

The 100 SMA is below the longer-term 200 SMA to indicate that the path of least resistance is to the downside. In other words, the selloff is more likely to gain traction than to reverse. Price is also currently testing the 100 SMA dynamic inflection point that could be enough to keep gains in check.

RSI is still on the move up to show that there is some bullish pressure left, but the oscillator is nearing the overbought region to signal exhaustion among buyers. Stochastic is already in the overbought region to confirm that buyers might need to take a break and let sellers take over. Turning lower could confirm that bearish momentum is in play. 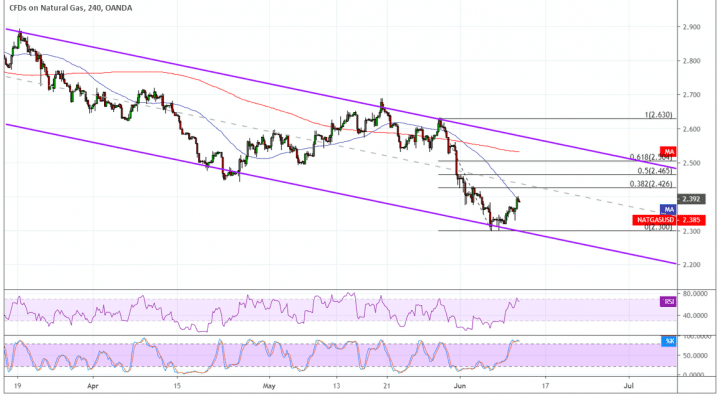 According to NatGasWeather for June 11 to June 17:

“A large weather system and associated cool front will sweep across the northern and central US over the next several days with highs of 60s to 70s. This system will also cool Texas, the South, and Southeast into the comfortable 80s, although warming back into the upper 80s to lower 90s late week. Strong high pressure will bring heat across the West and Southwest with highs of upper 80s to 100s for regionally strong demand.”

In the previous week, the EIA reported that natural gas supply increased, although some analysts pinned this on the Memorial Day miss.