Natural gas was previously trading above a short-term rising trend line before making a strong breakdown to indicate that a reversal is due. Price found support at $2.315 and might be due for a correction before heading further down.

Applying the Fibonacci retracement tool on the latest swing high and low shows that the 61.8% level lines up with the broken trend line that might now hold as resistance. This is also near the dynamic inflection points at the moving averages.

On the subject of moving averages, the 100 SMA stayed below the longer-term 200 SMA to indicate that the path of least resistance is to the downside. In other words, the downtrend is more likely to gain traction than to reverse.

However, RSI is just starting to move north after recently reaching the oversold region. This signals that buyers might be regaining control while sellers take a break. Similarly stochastic is heading up and price might follow suit as bullish pressure returns. Both oscillators have room to climb before reaching the overbought zone, so buyers could stay on. 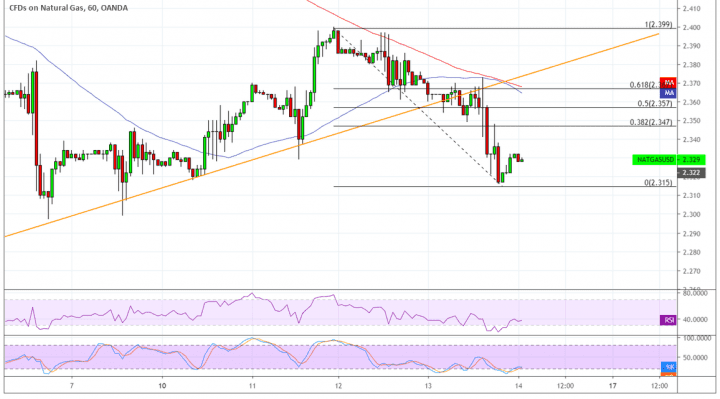 Natural gas is under downside pressure, especially since warmer weather conditions across the US would keep a lid on demand in the months ahead. To top it off, risk appetite has been particularly weak on account of geopolitical risks and trade tensions. Both of these weigh on business outlook, which in turn weighs on their demand for commodities.

Still, one factor that could keep natural gas prices propped up is the anticipation of purchases by Saudi Arabia through a long-term contract. For now, higher production forecasts as shared by the Energy Information Administration in their Short-term Energy Outlook are dragging prices down.