NZDCAD might be in for a downtrend as price formed a double top pattern and is testing the neckline at the .8900 mark. A break below this could spur a drop of the same height as the formation or around 400 pips.

The 100 SMA is still above the longer-term 200 SMA to indicate that the path of least resistance is to the upside. In other words, the uptrend is more likely to gain traction and support is more likely to hold. However, price is already below the 100 SMA dynamic inflection point as an early indication of selling pressure.

The 200 SMA is close to the neckline support, so a break below this would add confirmation that a selloff is imminent. Stronger selling pressure could even take NZDCAD down to the lows at the .8300 level. 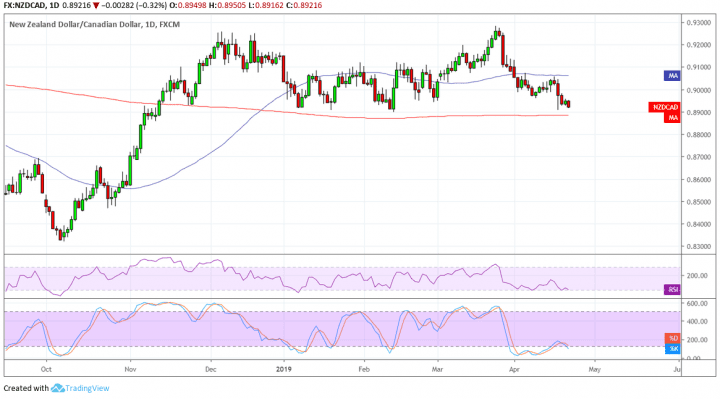 The BOC is due to make its monetary policy decision this week and is widely expected to announce no change in interest rates. Economic data from Canada has also been mostly upbeat lately so there are speculations that the central bank could maintain its neutral stance versus most that are switching to a more dovish stance.

Meanwhile, the RBNZ recently signaled its plans to cut interest rates sometime this year. Some believe that it could happen as early as next month, so there is significant downside pressure on the Kiwi at the moment.

Note that the Loonie also has some strength to draw from rising crude oil prices as the US move to lift waivers off Iran oil sanctions could further restrict global supply.