Prices of Gold Ready to Breakout? US Election Poll Signal A Diverging Trend

49 DAYS TO US ELECTION

The most recent polls show that the Joe Biden, a Democratic Nominee and a former vice president in the lead, not just for the general election, but also in the swing states. Although President Trump won these swing states in the 2016 election, the most recent data seem to be in favor of Biden. That said, the betting average seems to signal convergence.

As mentioned earlier, the key states such, as Florida remains the battleground for election campaigns. Both Biden and Trump have spent over $50 million on television advertisements in Florida alone. Back in 2008 and 2012, the state voted for Democratic’s and Barrack Obama won. However, in 2016, the state voted for President Trump. 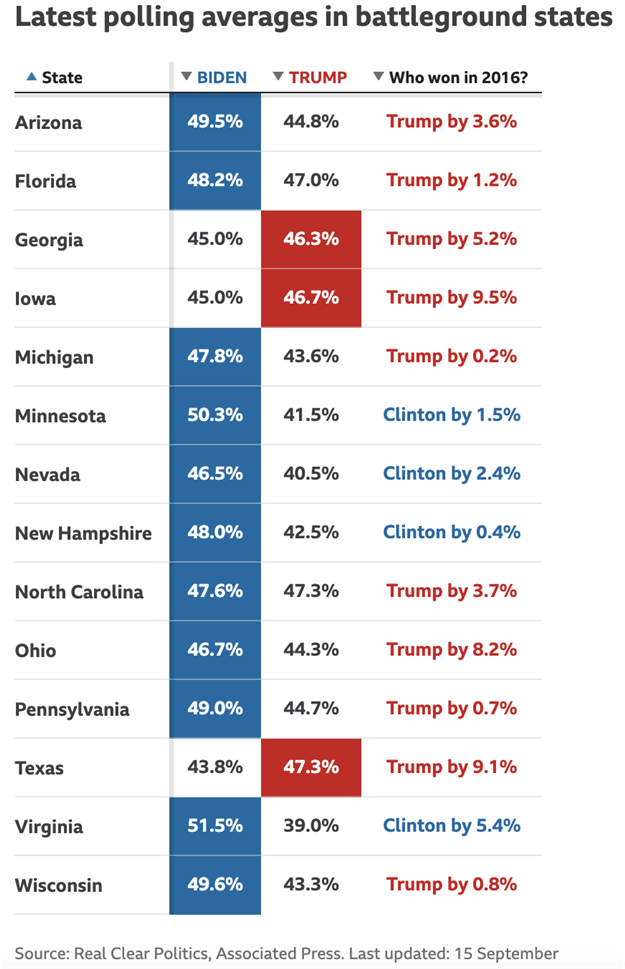 A closer look ahead into how the margins rise in Trump-Biden spread before the presidential debate on 29th September might create volatility asymmetric risks. Incase the race becomes tighter and the outlook gets cloudier, the directional change in the election polls might ignite a volatility session with the traders repositioning themselves to a new geopolitical outlook as Prices of Gold Weaken Ahead of FOMC Meeting Amidst Change in the US Dollar Sentiments.

With regards to the betting averages, the data slightly widened just after converging to the narrowest point since its crossover back in June. Nevertheless, the betting averages show a slow, yet steady confluence despite the data showing that the spread between trump-Biden is widening. It’s critical to see how this spread will turn out as we head closer to the US election. 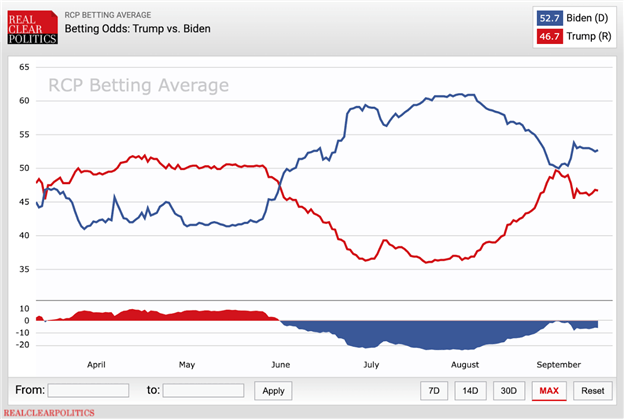 The prices of gold seem to be getting closer to the consolidated session after the aggressive rally in early August and late July. The XAU/USD seems to form a continuous curve referred to as the bullish pennant. The outlook of this technical design mostly involves the rally, which is followed by the digestive interim before the resumption of the uptrend. 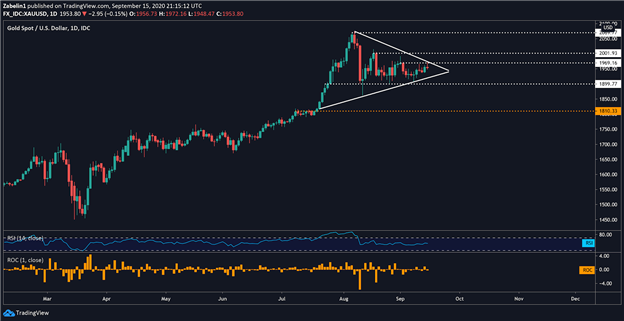 Nevertheless, the formations of the chart do not often generate the combined expectations linked to the technical pattern. As a result, incase the prices of gold break down, the selling pressure might start to encounter some challenges at short-term support.

Also, incase the compression territory between the ascending support and descending resistance ignite a surge higher, the bullish trend for the precious metal might continue. The key test of its durability will most likely stay at 2069.77. Following its clearance, the bullish sentiment might continue to build with the narratives confluence regarding its better prospects, possibly nudging the XAU/USD higher.