The Russian ruble settled the trading week higher against the US dollar and other major currencies. Moscow has been bombarded with economic sanctions over its invasion of Ukraine, but the Eastern European energy powerhouse has been able to withstand the onslaught of restrictions, which has allowed the ruble to stabilize. Can the ruble and Russia defy the West?

According to the Federal State Statistics Service (FSSS) the annual inflation surged to 17.8% in April, up from 16.7% in March. However, on a month-over-month basis, the consumer price index (CPI) clocked in at 1.6%, down from the 7.6% spike in the previous month.

In other economic data, automobile sales plummeted 78.5% year-over-year in April.

Next week, the first-quarter gross domestic product (GDP) and producer price numbers will be released. It has been widely expected that Moscow would slip into a recession because of its invasion of Ukraine, but the Russian economy has been able to withstand many pressures.

In a recent research note, JPMorgan Chase stated that Russia’s slowdown will not be nearly as bad as many expect. While the Wall Street titan forecasts a 35% plunge in GDP in the second quarter, the bank thinks its projection was too large. 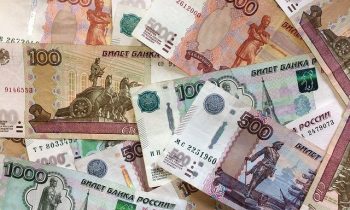 JPMorgan says that many business sentiment surveys “are signaling a not very deep recession in Russia, and therefore imply upside risks to our growth forecasts.”

“The impact of sanctions will continue building in coming quarters, we expect,” JPMorgan said. “The GDP profile, therefore, looks increasingly likely to be consistent with a drawn-out, but not very sharp recession.”

Contrary to what many had initially expected, energy production and trade flows remain strong in Russia.

Meanwhile, the ruble has strengthened 11% against the US dollar year-to-date and 18% over the last month.