Soybean futures are skyrocketing on Thursday as markets think Chinese importers will continue to buy US agricultural goods, despite reports that Beijing has mandated state-owned firms to suspend American purchases. This analysis was supported by news that US exported executed deals to ship heavy volumes of soybeans to unknown destinations, which many industry observers think is China.

July soybean futures soared $0.115, or 1.34%, to $8.69 per bushel at 18:21 GMT on Thursday on the Chicago Board of Trade (CBoT). Soybean prices are on track for a huge weekly gain of nearly 3%, spurred by larger demand and optimism over economies reopening. However, the agricultural good is still down 9% year-to-date.

US exporters booked arrangements to ship 186,000 tons of soybeans to unknown destinations, according to trade data from the US Department of Agriculture (USDA). The transaction includes 66,000 tons to be exported during the 2019-2020 marketing season and 120,000 tons to be shipped during the 2020/2021 marketing year. The deal initially named China as the destination, but then it was corrected and relabeled as unknown.

Earlier this week, the USDA reported that the world’s largest consumer of soybeans had completed purchases of 132,000 tons of the US crop. 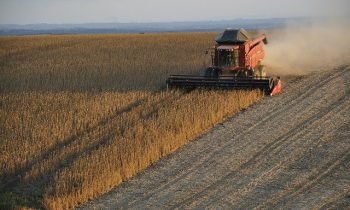 This is big news because Bloomberg reported earlier this week that the central government mandated state-run agricultural firms to suspend purchases of US farming goods, including soybeans and pork. Reuters also reported that state-owned enterprises inquired about as many as 30 cargoes of soybeans before halting the large-scale purchase.

Overall, analysts do not think Chinese importers – public and private – will stop buying from the US. Shanghai JC Intelligence Co. presented the case that supplies are still short of meeting renewed demand nationwide. Hog breeding is projected to recover, and animal feed is expected to grow. Plus, the Brazilian real has rebounded since collapsing to an all-time low against multiple currencies, making that nation’s commodities more expensive.

Despite China falling short of meeting the provisions inside the phase-one trade agreement, experts believe Beijing will eventually catch up and buy the roughly $36.5 billion in US agriculture this year.