The S&P 500 index retraced for another day on the dwindling hopes that the fiscal stimulus deal would be approved before the upcoming US presidential election. Steven Mnuchin, the Treasury Secretary has already made it quite clear that the chances of reaching a deal are still thin, even after negotiations with Nancy Pelosi, the House Speaker. Nevertheless, Joe Biden, the Democratic Presidential candidate continues to lead on the polls against president trump with a wider gap that might bring fewer hopes for the democratic sponsored fiscal stimulus package in spring 2021.

The corporate earnings still delivered additional positive surprises that might help cushion the downtrend of the stock market consolidation. 6 out of 8 S&P 500 components that released their third-quarter results yesterday, thus beating the analyst’s forecasts. Also, it’s worth taking note of the fact that Goldman Sachs had broken the consensus EPS forecast by about 75%. Lower loan offerings and a stronger trading performance helped increase the bank’s profits from 2019 as APAC Stocks Weekly Outlook – ASX 200, HANG SENG INDEX, DOW JONES.

Charles Schwab and Morgan Stanley are some of the biggest US companies to release their earnings on Thursday, followed by the Bank of New York Mellon and Honeywell on Friday.

Technically speaking, the S&P index seemed to give gained entry into the minor correction after it hit the 6-week high on Tuesday. Considering the strong upside momentum that was recently observed, although the S&P 500 index might regain its strength after some consolidation. Key support levels can be seen at the 3,469 Fibonacci (23.6% retracement) and 3,420 Fibonacci (38.2% retracement). 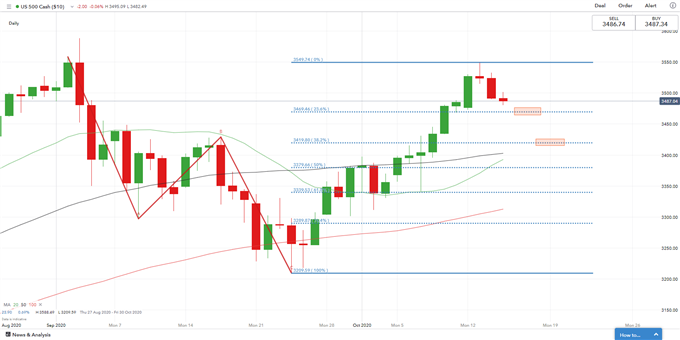