The Country that Banned Bitcoin Pumped it by 41.85%

China banned bitcoin trading back in 2017. But the country continues to explore the cryptocurrency’s underlying technology to create its version of digital money. On Friday, President Xi Jinping asserted the same in his speech, stating they would be investing heavily in the technology that records and maintains data without relying on third-party servers.

A supersonic rise in the bitcoin price soon followed the statement. The bitcoin-to-dollar exchange rate over the weekend surged by as much as 41.85 percent, negating last week’s significant losses. For a brief period, the pair jumped above the critical $10,000 level, only 48 hours after it had dipped below $7,500. The sudden upside revived the cryptocurrency’s interim bullish bias, with traders now either exiting their Long positions or waiting for another push to the north. 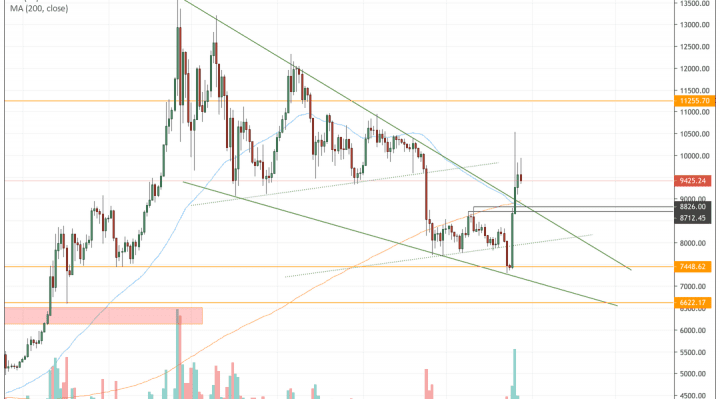 Bitcoin’s latest upside in the wake of President Jinping’s comments on blockchain technology is reminiscent of Libra. In June, when Facebook announced its payment project, the firm unknowingly boosted the demand for bitcoin. Investors took Facebook’s validation of bitcoin’s underlying technology as a cue to go Long on the cryptocurrency. The cryptocurrency, as a result, established its year-to-date high of $14,000.

The same is now happening after Jinping’s statements. Maple Leaf Capital wrote in a lengthy Twitter thread that the CPC Central Committee’s decision to put more investments in the blockchain is a “strategic pillar” that permeates the bitcoin ecosystem in the next 1-2 years. Excerpts:

“First, one has to realize that in China, the policies follow the premiere’s tone and permeates down. Xi sets the tone, subsidies, and policies follow, and ultimately gets carried out in detail in local regions […] Doesn’t mean [bitcoin] can’t go lower in the interim (chart says chop for a while), but this event is something to be extra mindful of as it actually drives both narrative and fundamentals (i.e. demand), similar to the halving being a supply event.”

I meant halving step-function reduces SUPPLY! duh silly me, got too excited typing it all out.

On the technical front, as FXDailyReport had predicted, bitcoin broke out of the Falling Wedge pattern. Nevertheless, the upside caught the market by surprise, for it would not have expected it to arrive unless the end of December. But it did, which means bitcoin could be faking after all.

A fakeout, exactly, is what the bitcoin market is looking at right now. It means – that in the absence of an additional bullish push – the price could likely fall back into the Falling Wedge range. As of now, bitcoin has corrected by more than 10 percent already.