The US dollar is weakening against many major currency competitors on Thursday after the US government reported a historic number of initial jobless claims never seen before. The Federal Reserve’s aggressive monetary action and Washington’s unprecedented $2 trillion stimulus bill are also weighing on the greenback’s performance this week.

Initial jobless claims soared to an all-time high of 3.283 million for the week ending March 21, up from 280,000 in the previous week. The consensus estimate penciled in a reading of about 1.5 million. This is the biggest number ever recorded since the government started tracking this metric. The previous records were 665,000 during the Great Recession and 695,000 in October 1982.

Moreover, the four-week moving average, which takes out week-to-week volatility, climbed to a record high one million. Continuing jobless claims jumped to 1.8 million, higher than the market forecast of 1.71 million.

Instead of decimating the market, the leading US indexes continued their three-day rally. The Dow Jones Industrial Average soared 1,000 points, the S&P 500 picked up about 5%, and the Nasdaq Composite Index tacked on roughly 4%. The benchmark 10-year Treasury dipped to 0.805%, while gold rose 0.73% to $1,645.

In other data, the final gross domestic product (GDP) growth rate for the fourth water clocked in at 2.1%. The GDP Q4 price index rose 1.4%. The personal consumption expenditures (PCE) pricing index climbed 1.4%, and the goods trade deficit slipped from -$65.9 billion in January to -$59.89 billion last month. 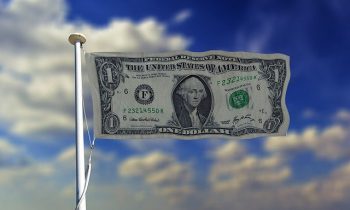 Congress continues to squabble over the details of its massive $2 trillion stimulus bill, though both parties say that it is close to getting done. It includes billions of dollars in support for workers, small businesses, airlines, and hospitals. This would be in addition to the central bank’s unlimited QE program that pumps trillions of dollars into the financial system.

Fed Chair Jerome Powell attempted to reassure everyone that “this is not a typical downturn”:

“This is a unique situation. People need to understand, this is not a typical downturn. At a certain point, we will get the spread of the virus under control. At that time, confidence will return, businesses will open again, people will come back to work. So you may well see a significant rise in unemployment, a significant decline in economic activity. But there can also be a good rebound on the other side of that.”