The USD/CAD currency pair on Wednesday rallied to hit new 6-week highs of about 1.3327 before pulling back to trade at around 1.3303 after the latest round of economic data. The currency pair had plunged to bottom at around 1.3200 earlier in the week but has since rallied to extend last week’s gains.

The pair has been trading in an ascending channel since late last month albeit with a  series of pullback and rebounds and recently hit the overbought levels of the RSI indicator in the 60-min chart.

From a fundamental perspective, the USD/CAD currency pair is trading at the back of a relatively calm period in both the US and the Canadian financial markets. On Tuesday, the US Building Permits data for October neat expectations of 1.385M with 1.461M but Housing Starts missed 1.32M with 1.314M.

Building Permits change saw an increase of 5% compared to the previous month’s decline of 2.4 in the process beating an expected change of 0.0%. Housing Starts Change also beat the expectation of 0.6% with 3.8% while the Redbook Index edged lower on both (MoM) and (YoY) measures from the previous period. 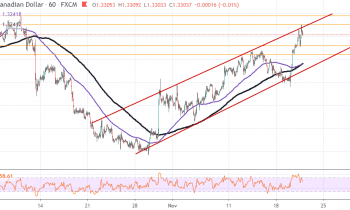 Technically, the USD/CAD currency pair continues to trade in an ascending channel, which dates back to late October. This indicates a short-term bullish bias in the market sentiment. Both the 100-hour and the 200-hour SMA lines are several levels below the current position of the pair while the RSI indicator has just returned to normal trading zone after spending some time in the overbought levels.

Therefore, an imminent pullback appears to be the month cards. The bears will be targeting short-term profits at around 1.3280 or lower at 1.3261 while the bulls will hope for a continuation of the bullish run towards 1.3327 and 1.3345. 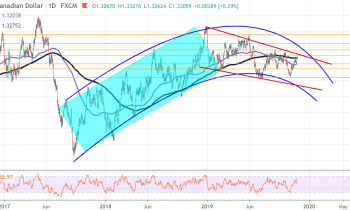 In the daily chart, the USD/CAD currency pair appears to be trading in a descending wedge coming off a major bullish run that dates back to the start of 2018. The current bearish movement began at the start of this year and looks likely to carry on till the end.