The USD/CAD currency pair pulled back on Thursday to trade at around 1.3256 following a Fed rate cut on Wednesday. The pair had rallied to top 1.3305 this week before wiping the current weekly gains by near 50%.

The currency pair continues to trade in an ascending channel, which implies a short-term bullish bias in the market sentiment. It recently dropped below the 100-hour moving average line while the 200-hour MA is several pips below.

From a fundamental perspective, the USD/CAD currency pair is trading at the back of key events in both the US and Canada. Yesterday, the US Federal Reserve made an announcement on “substantial risk”, which the market interpreted could trigger an additional $150 billion treasury purchases by the government.

This would be a first major announcement in 10 years shortly coming after cutting the Funds rate by 25 basis points for the second time this year. And on Thursday, continuing and initial jobless claims beat expectations with 1.661M versus 1.671M and 208k versus 213k respectively.

On the other hand, in Canada, the ADP Employment Change for August came in at 49.3k beating the expectations of -30.6k. Yesterday, the BoC CPI had missed expectations of 2.0% (YoY) change with a 1.9% change. The (MoM) change was in line with expectations at 0.1%. However, the BoC’s Core CPI missed on both metrics. 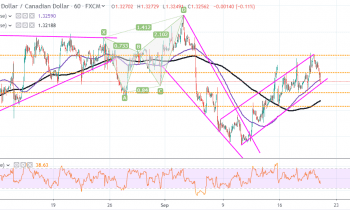 Technically, the USD/CAD currency pair appears to be trading in an upward trending channel, which indicates a short-term bullish bias in the 60-min chart. The pair also appears centrally positioned in the RSI indicator and this implies that the current trend could continue for a few days before a major reversal takes place.

Therefore, following the latest pullback, the bulls will be eyeing a rebound going into Friday and they will target short-term profits at around  1.3272 and 1.3305. On the other hand, the bears will look to pounce for profits at around 1.3234 and 1.3208. 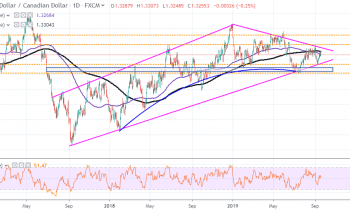 In the daily chart, the USD/CAD currency pair appears to be trading in a consolidative bearish triangle formation, which suggests that in the long-term, the pair could be approaching a major bearish breakout.

Both the 100-day and the 200-day moving average lines are slightly above the current position of the pair, which indicates intense bearish pressure. Therefore, the bears will target long-term profits at around 1.3131 and 1.3015. On the other hand, the bulls will be targeting profits at around 1.3393 and 1.3518.

In summary, the USD/CAD currency pair appears to be trading under intense bullish pressure in the short-term, but in the long-term, the bears retain control.