The Chinese yuan is gaining some momentum against its US counterpart in the middle of the trading week, buoyed by stronger export data in September. Although the currency has failed to maintain the same level of growth as last year, the yuan has still performed exceptionally well against the greenback.

According to the General Administration of Customs, China’s trade surplus ballooned to $66.76 billion in September, up from $35.34 billion the same time a year ago. This was also the widest trade surplus since December 2020.

China’s trade surplus with the US widened to $42, billion, bringing the trade surplus in the first nine months of the year to just under $430 billion.

In September, Chinese exports advanced 28.1% year-over-year to a record high of $305.7 billion, up from the 25.6% gain in August. The market had penciled in a jump of 21%. The export growth rate was driven by greater shipments of steel, aluminum, and rare earths shipments.

More than half of China’s exports comprised of two markets: the US and Europe.

Imports to China climbed at an annualized rate of 17.6% last month to an all-time high of $239 billion. This fell short of market expectations of 20% and the latest reading eased from 33.1% in August. Most of the growth was driven by demand for coal, natural gas, and refined products. However, there was a decline in purchases of crude oil, copper, and soybeans. 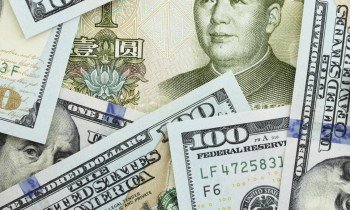 Moreover, outstanding loan growth slipped to 11.9%, while the M2 money supply edged up 8.3%.

Despite the positive data, it is anticipated that China’s broader economies problems could intensify in the coming months. This comes as President Xi Jinping has increased scrutiny of the close relations between the nation’s state-owned financial institutions and private organizations. Plus, if China Evergrande Group, a cash-strapped property developer with $310 billion in obligations, defaults on its debt, the world’s second-largest economy could slip into a recession.