The USD/JPY currency pair plunged in the final hour of Friday’s trading session after President Donald Trump went berzerk on Twitter in a retaliation campaign to China’s announcement on trade tariffs on US goods.

The currency pair appeared to break out of a bullish consolidative triangle formation a move that pushed it to set new 10-day lows of about 105.400. The USD/JPY had rallied to challenge the current resistance of about 106.837 but now looks closer to the support zone at 105.034.

From a fundamental perspective, the USD/JPY currency pair is trading at the back of what has been a calm week, bar the events of later Friday afternoon (US session). Nothing much from the side of economic data could sway the pair towards a particular direction.

However, after China’s announcement of trade tariffs on US goods worth up to $75 billion, President voiced his views on Twitter creating a tweet-storm that triggered a massive plunge in the greenback against other currencies.

US equities plunged in the late trading hours with all major trading indices down by at least 1%. This comes just days after the Federal Reserve said that the decision to cut interest rates earlier this month had nothing to do with a potential stimulus package. But now, with investors rushing to safe-haven currencies like the JPY, it shows that risk-off investing is beginning to take a toll on the greenback. 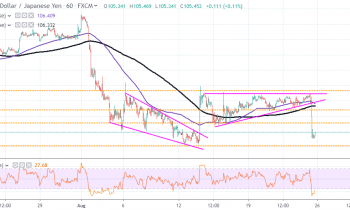 Technically, the USD/JPY currency pair appears to have recently hit oversold levels in the Relative Strength Index Indicator. This could provide some much-needed support for the pair with the bears moving in to cover the trades.

Therefore, this gives the bulls more optimism going into next week and they could target profits around 105.776, 106.205 or high at 106.837 should a full recovery take place. On the other hand, bears will target short-term profits at around 105.034. 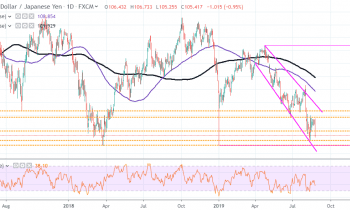 In the daily chart, the USD/JPY currency pair appears to be experiencing intense bearish pressure after a sustained period of decline that dates back to April this year. The pair recently bounced off the trendline support at around 105.034 and now looks set to retest 104.684, which will be a good target for the bears.

On the other hand, the bulls will look to target long-term profits at around 107.326. The RSI indicator shows that the current bearish channel could remain intact through next week, which gives the bears more optimism going into the final week of the month.

In summary, the USD/JPY currency pair appears to be experiencing a long-term bearish bias. The latest short-term bullish run was cut short today after Trump’s tweet-storm, and this will further boost the bearish sentiment toward the pair.