The USD/JPY currency pair on Friday rallied towards the 61.80% Fib level as it recovers from the massive plunge suffered late last month. The pair traded lower for the most part of this week before Friday’s NFP-driven rally took over.

The currency pair has now surged towards overbought levels of the 14-hour RSI in the 60-min chart. It also crossed above the 100-hour SMA while the 200-hour counterpart remains several levels lower.

From a fundamental perspective, the USD/JPY currency pair is trading at the back of a relatively busy period in both the US and the Japanese markets. In Japan, the Bank of Japan chose to keep the base interest rate unchanged at 2.2%. On Monday, Tokyo CPI ex-fresh food outperformed the expectation of 0.2% (YoY) with 0.4%. The general CPI also beat 0.4% with 0.6% while CPI ex-food and energy outshone 0.5% with 0.6% (YoY). Overall household spending for June fell 1.2% in June (YoY), which was better than the expected decline of 7.5%. On Friday, the preliminary leading economic index fro June beat 78.8 with 85.

In the US, the US jobs data for July outperformed the expected return of 1.6 million new jobs after creating 1.763M tertiary jobs. The average hourly earnings for the month also rose 4.8% compared to an expected increase of 4.2% while the unemployment rate eased to 10.2% versus 10.5%. The labor force participation rate came in at 61.4% versus an expectation of 61.1%. Earlier in the week, the ISM Manufacturing PMI beat the expectation of 53.6 with 54.2. On the other hand, the ISM Services PMI for the same period outperformed 55 with 58.1. 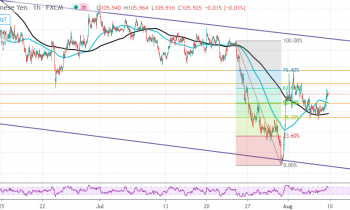 Technically, the USD/JPY currency pair appears to be trading within a sharply rising curve after pulling back earlier in the week. The pair has now climbed back to trade within touching distance of the 61.80% Fib level. 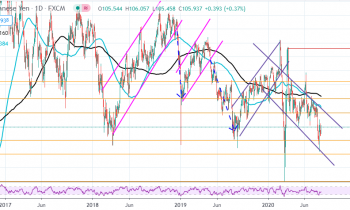 In the daily chart, the USD/JPY currency pair appears to be trading within a sharply descending channel. This indicates a strong long-term bearish bias in the market sentiment.