The Russian ruble kicked off the second half of 2022 flat against its US counterpart, but it was able to record a tepid weekly gain. Despite a plethora of sanctions and restrictions on Moscow, companies, and officials, the ruble has been the top-performing currency in global forex markets. Can the currency add to its surprising gains over the next six months?

The economic data was not great for the Eastern European country this week.

Real wage growth tumbled 7.2% year-over-year in April. Industrial production fell at an annualized pace of 1.7% in May. Retail sales cratered 10.1% from the same time a year ago.

Russia’s economy contracted 4.3% year-over-year in May. This had business and consumer confidence weaken considerably in June.

Over the next week, purchasing managers’ index (PMI) readings will be released, as well as inflation and vehicle sales data.

Despite the lackluster economy amid the Kremlin’s invasion of Ukraine, the ruble has been booming this year.

But market analysts say that cracks are beginning to form in the Russian economy, which could sway public opinion against President Vladimir Putin, and this might include corporations. But it might not happen until there is a full-blown collapse and that has yet to occur.

“The [Russian] economy is not yet showing acute signs of crisis,” Oleg Itskhoki, an economist at the University of California, Los Angeles, told Yahoo News. “There is no collapse yet. But everyone expects a deterioration.” 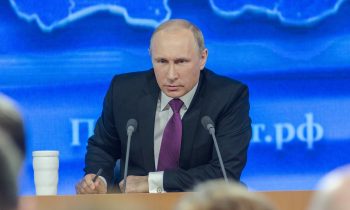 Indeed, Moscow does not appear to be preparing for a financial crisis. The central bank has cut interest rates, the Kremlin is attempting to cover its debt obligations, and the war chest remains intact at roughly $600 billion.

Consumers might be a different story, however. Multiple reports suggest that the sanctions are beginning to impact a growing number of the population, while many households have revealed they are unlikely to make any major purchases this year.

Whether the Russian economy can survive or not remains to be seen.