USDCHF recently broke below the bottom of its ascending channel on the 4-hour time frame to signal that a reversal from the uptrend is due. Price might be in for a pullback to this broken support to gather more selling pressure.

On the subject of moving averages, the 100 SMA is still above the 200 SMA to indicate that the path of least resistance is to the upside or that the uptrend is more likely to gain traction than to reverse. However, the gap between the indicators has narrowed to signal that bullish momentum is fading and that a bearish crossover may be in order.

RSI is still pointing up to indicate that there is some bullish pressure left, likely allowing the pullback to take place first. Stochastic is also just making its way out of the oversold region to indicate that buyers are just about to return. If any of the Fib levels hold as resistance, USDCHF could make its way back down to the swing low or lower. 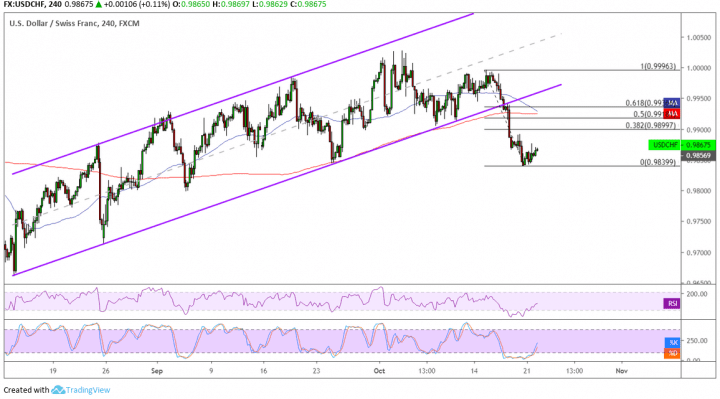 The only report up for release in the US is durable goods orders, and this does not usually have a strong impact on price action. There are no major reports lined up from the Swiss economy, so market sentiment might dictate where the lower-yielding franc is headed next.

Apart from that, updates from the US-China trade talks could also influence where this pair is headed next, but it looks like dollar bulls are getting frustrated with the lack of progress. The US Commerce Secretary said that a deal doesn’t have to be finalized by next month while China is pursuing retaliatory measures on a WTO violation by the US during the Obama presidency.