USDCHF recently broke below the bottom of its triangle consolidation to signal that sellers have won the upper hand. A pullback to the broken support might happen before price heads any further south.

Using the Fib tool shows that the 61.8% level lines up with the triangle bottom around .9675, which might hold as resistance. A shallow pullback could already hit a ceiling at the 50% Fib near the .9650 minor psychological mark or the 38.2% Fib at .9637.

The 100 SMA is below the 200 SMA to confirm that the path of least resistance is to the downside or that resistance levels are more likely to hold than to break. The 50% level lines up with the 100 SMA dynamic inflection point, which adds to its strength as a potential ceiling.

If any of the Fibs are able to keep gains in check, USDCHF could slide back to the swing low at .9575 or fall by the same height as the triangle pattern.

RSI is on middle ground on the move up, though, so there might still be some buying pressure left in play. Bearish momentum might pick up once the oscillator reaches the overbought zone and turns lower. Similarly, stochastic has a bit of room to climb before indicating overbought conditions, so the correction could still go on. 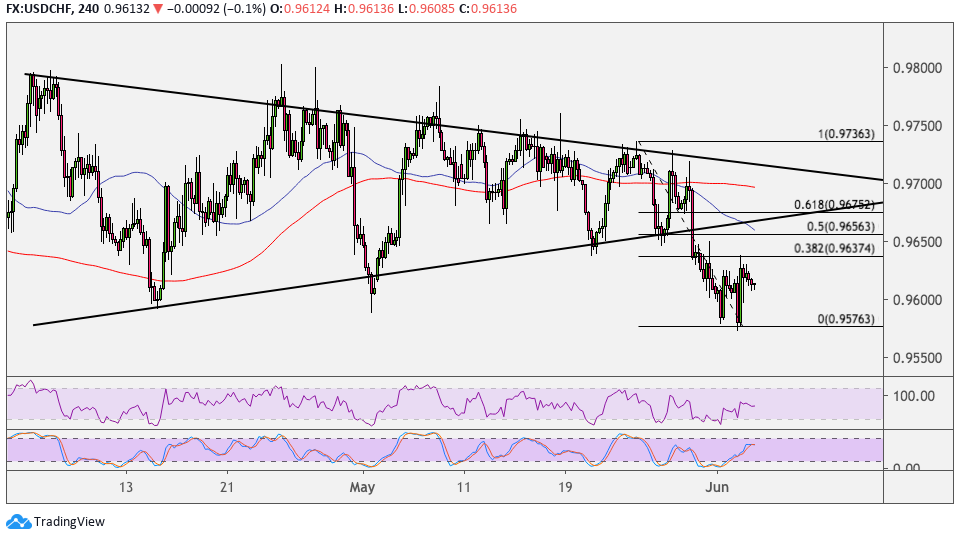 The US dollar has been on weak footing in the past trading sessions as risk appetite was boosted by hopes of more OPEC output cuts and speculations of an economic recovery from the pandemic.

The Swiss GDP is up for release in a few hours and could show a 2% contraction for Q1, which could lead to a bit of a bounce for this pair as the franc sells off. Still, a continuation of risk-taking throughout the day might favor the franc versus the safe-haven dollar.