USDCHF has formed a double bottom on its 1-hour time frame to signal that a reversal from the selloff is due. Price is already testing the neckline, and a break higher could confirm that an uptrend will follow.

The 100 SMA is below the 200 SMA to indicate that the path of least resistance is to the downside or that the selloff is more likely to gain traction than to reverse. Then again, the gap between the indicators is narrowing to reflect weaker selling pressure and a potential bullish crossover.

RSI is already turning lower to indicate that selling pressure is returning, suggesting that the neckline resistance might still hold for now. Stochastic is also in the overbought region to reflect exhaustion among buyers, but the oscillator has yet to move down to confirm a return in bearish momentum. If so, a slide back to the lows around .9680 might follow. 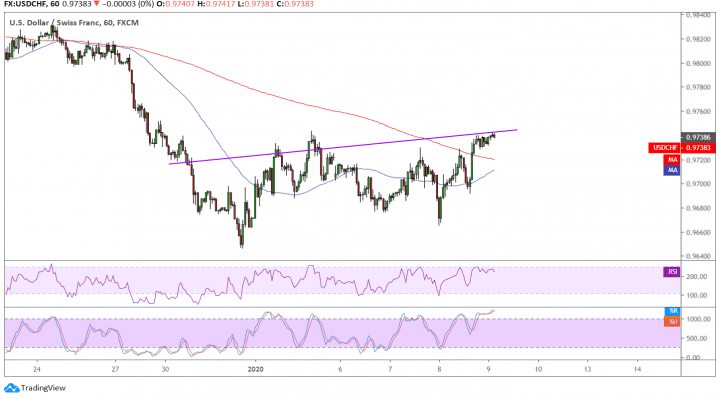 Dollar traders seem to be holding out to see how the situation between the US and Iran pans out. So far, it appears that both countries are seeking to de-escalate the tension, which might spur a relief rally for the US dollar. On the other hand, worsening tensions could drag the US currency south in favor of the Swiss franc, which is typically deemed as a safe-haven in some cases.

Only medium-tier reports are due from the Swiss economy this week while the dollar has the NFP report to contend with. Strong jobs results could shore up demand for the US currency as it would dash hopes of a Fed rate cut soon while a weak read could drag the US currency south. Leading indicators such as the ADP employment report have mostly signaled the potential for an upside surprise.