USDCHF Waiting for a Triangle Breakout

USDCHF has formed lower highs and higher lows to consolidate inside a symmetrical triangle pattern on the 1-hour time frame. Price just bounced off the resistance and might be setting its sights back on support.

The 100 SMA is below the longer-term 200 SMA to indicate that the path of least resistance is to the downside or that support is more likely to break than to hold. If so, price could fall by around the same height as the chart pattern, which spans .9650 to .9750.

RSI is on middle ground to reflect consolidation but has been on the move down previously, so selling pressure is still in play. Stochastic already reached the oversold region and is turning higher to suggest that buyers could take over while seller take a break. 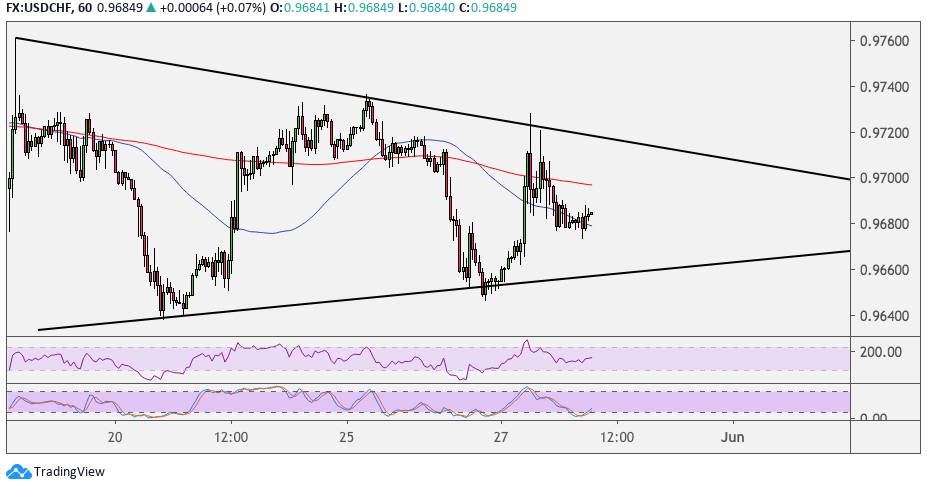 There are no major reports due from the Swiss economy today, so this pair might continue to trade inside the triangle pattern. The US has preliminary GDP data coming up and no revisions are eyed for the previously reported 4.8% contraction.

A downgrade, however, could mean more bearish pressure for the dollar while an upgrade could lend a bit of support. Durable goods orders data are also up for release, with the headline reading expected to show a 19% slump and the core figure expected to post a 14.8% decline.

Initial jobless claims are also due today and this tends to generate a strong short-term reaction from dollar pairs as traders are still trying to calculate the monthly total for job losses. Unemployment is expected to have increased by 2.1 million in the past week, based on the number of folks claiming jobless benefits for the first time.

A higher than expected read could also put downside pressure on the dollar while an upside surprise might lead to a quick bounce.