USDJPY recently broke below support around the 109.00 major psychological mark and fell to a low of 107.83. Price appears to be in the middle of a correction and is already testing the 38.2% Fibonacci retracement level.

If this keeps holding as resistance, USDJPY could fall back to the swing low or lower. A larger retracement could last until the 61.8% level at 109.15, but a break above this could take the pair up to the swing high around 110.00 or beyond.

The 100 SMA crossed above the longer-term 200 SMA to indicate that the path of least resistance is to the upside. In other words, bulls might have the upper hand and resistance levels are more likely to break than to hold. Price is currently trading above both moving averages so these could keep holding as dynamic support.

RSI seems to be heading higher to show that bullish momentum is returning. Stochastic is already in the oversold region to signal exhaustion among sellers and a possible return in bullish pressure. 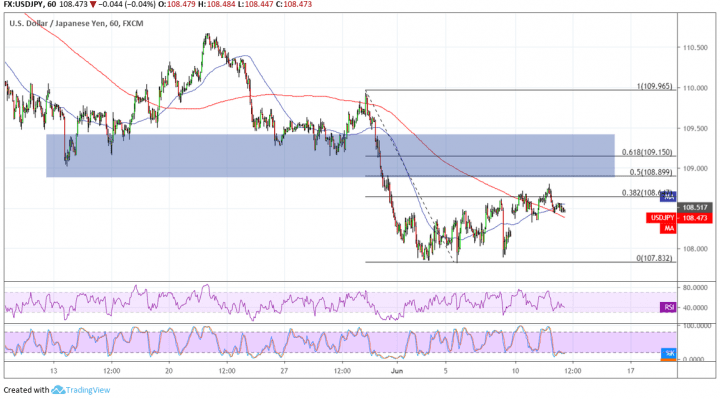 The US has its CPI and retail sales report to contend with, and these could bring about additional volatility for the pair. Headline CPI is projected to come in at 0.1% versus the previous 0.3% increase while the core reading could show a 0.2% uptick versus the earlier 0.1% gain.

The yen did gain some ground in the previous weeks on account of trade tensions between the US and China, along with the drop in the dollar on account of weak jobs data. Headline retail sales could come in at 0.7% while the core version of the report could print a 0.5% increase.

However, risk appetite has also ticked higher in the past few days as global easing expectations are increasing. This has weighed on both the dollar and the yen, but more on the former due to trade tensions and weakening data.