Why First Republic Bank (NYSE: FRC) stock is under pressure

First Republic Bank (NYSE: FRC) stock lost over 4.1% on April 15th, 2020 (As of 2:02 pm GMT-4; Source: Google finance). Loan origination volume was slightly over than $10 billion. The average loan-to-value ratio for all real estate loans originated during the first quarter was at a conservative 55%. Single-family residential volume was $3.5 billion. Refinance had accounted for 69% of single-family residential volume during the first quarter. The majority of the refinance activity came from clients of other institutions. Multi-family and commercial real estate lending also performed well. Balances are up 17% from a year ago. In the business banking segment, the business loans and line commitments had increased 17% year-over-year. 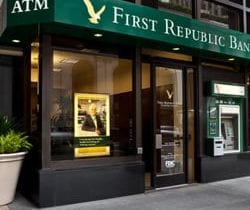 Moreover, total deposits had risen by 15% from a year ago. The company continues to maintain a diversified deposit funding base. Checking deposits rose by $5 billion in the first quarter and now represent approximately 62% of total deposits. Business deposits forms 55% of total deposits, which are in line with the prior quarter. The company’s assets under management had fallen by 9% from year-end due to market conditions but are down only modestly year-over-year. The company has reported the net client inflow of $5 billion during the quarter.

Additionally, in January, the company had successfully completed a common stock offering, which raised $290 million in new equity. At the end of March, the company’s Tier 1 leverage ratio was 8.46%. The company has now announced a $0.01 increase in the quarterly dividend to $0.20 per common share.

The company’s liquidity position also remains strong. HQLA was 14.8% of total average assets in the first quarter. The HQLA percentage had risen by approximately 80 basis points from the elimination of the reserve requirement by the Federal Reserve in March.