Why Republic Services, Inc. (NYSE: RSG) stock is under pressure

Republic Services, Inc. (NYSE: RSG) stock fell over 1.9% on 31st October, 2019 (as of 10:38 am GMT-4; Source: Google finance) after the company posted better than expected results for the third quarter of FY 19 and raised the earnings outlook for FY 19. This is despite weakness in global recycled commodity markets and further declines in U.S. rig counts and drilling activity. 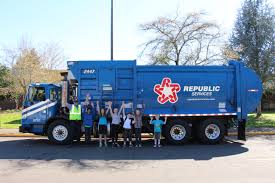 For FY 19, RSG has raised its adjusted diluted earnings per share guidance to be now in the range of $3.28 to $3.30 and reaffirmed its full-year adjusted free cash flow guidance expected to be in the range of $1,125 million to $1,175 million. The Company now expects to achieve the upper-end of its adjusted free cash flow guidance range. Further, RSG expects to make an investment of approximately $550 million in acquisitions and $150 million in solar energy investments that qualify for tax credits. The Company intends to return about $900 million total cash to shareholders, through approximately $500 million of dividends and $400 million in share repurchases.

For fiscal 2020, the company in its preliminary financial outlook expects the adjusted diluted earnings per share to be in a range of $3.46 to $3.51 and adjusted free cash flow to be in a range of $1,150 million to $1,200 million.  In 2020, the Company intends to reinvest approximately $100 million of its tax-reform savings into its fleet and front-line employee facilities, which means a $25 million increase from the $75 million investment in 2019.