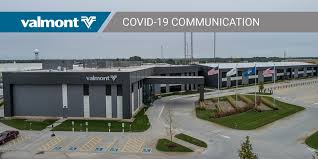 VMI in the second quarter of FY 20 has reported the adjusted earnings per share of $2.00, beating the analysts’ estimates for the adjusted earnings per share of $1.44. The company had reported 1.7 percent fall in the adjusted revenue to $688.8 million in the second quarter of FY 20, beating the analysts’ estimates for revenue of $653.87 million. Excluding $13.7 million of unfavorable currency impacts, the company’s sales were similar to last year, due to strong growth in Utility Support Structures was offset by lower sales in the Coatings segment due to COVID-19 impacts. Utility Support Structures Segment’s sales grew 10.2% year-over-year to $231.3 million, while there is 18.7% fall in the Coatings Segment’s sales to $80.0 million.

Meanwhile, during the second quarter, the Company had  purchased a majority stake in Solbras – Energia Solar do Brasil, which is a leading provider of solar energy solutions for agriculture that allows Valmont to deliver a first-to-market, advanced solar power and monitoring solution to growers. The Company has also expanded its global technology leadership position with the asset purchase of PrecisionKing, which is a subscription-based provider of control technology and remote monitoring solutions for the U.S. market.