The WTI crude oil on Thursday continued to extend the current weekly gains towards $34.00 after crude stock balances fell to the negative territory amid production cuts. Oil prices have rallied since the start of the month amid positive discussions towards cutting output.

The light crude oil has traded above both the 100-hour and the 200-hour SMA lines in the 60-min chart since late April and this looks to carry on through next week. The oil price is now approaching 50% recovery following the January-April plunge.

From a fundamental perspective, the price of oil is trading at the back of a relatively positive period in the oil market. On Tuesday, the US API Crude Oil stocks returned a figure of -4.8 million barrels, which is a positive change down from the previous period’s 7.6 million. On Wednesday, the EIA Crude Oil stocks change for the week ending May 15 came in at -4.983 million barrels compared to an expectation of 1.151 million. This also compares to the previous week’s balance of -0.745M.

Besides the positive developments on output and stock balances, oil prices remain under strong pressure due to the global economic slowdown caused by COVID-19. In addition, there is still a cloud of uncertainty surrounding OPEC on production cuts with some members refusing to cut supply. 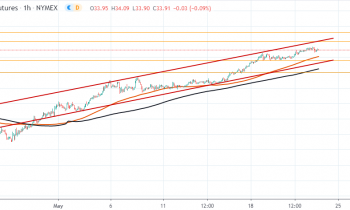 Technically, the light crude oil appears to be trading within a gently rising wedge in the 60-min chart. This indicates a short-term bullish bias in the market sentiment. The current trend appears set to continue through next week. 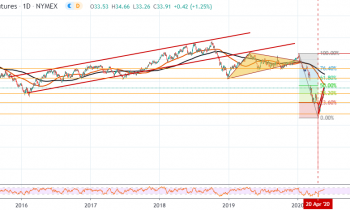 In the daily chart, the WTI Crude Oil still appears to be on recovery following the massive plunge suffered between January and April. It has now moved closer to the 50% Fib level in the daily chart. It is also approaching overbought levels in the 14-day RSI.