The price of WTI Crude Oil is holding firm above $60 after yesterday’s dovish Powell Statement. Oil prices have been on a steady upward trend since last week but now they appear to have met a strong resistance around the $60.00 level.

This price ceiling comes following a series of economic events whereby, last week, everything turned positive with the release of the US NFPs for June and this week, the sentiment reversed to negative after Powell’s statement on Wednesday.

From a fundamental perspective, the price of Crude Oil is trading at the back of a major week with the US Federal Reserve Chair Powell’s comments on Wednesday interpreted by the market as bearish coupled with economic data that failed to live up to expectations.

And on Thursday, the story was pretty much the same. The 4-Week Bill Action rate came in at 2.135% lower than the previous period rate of 2.210% while EIA Natural Gas Storage missed expectations of 73B with 81B, which added pressure to petroleum products.

The 30-Year Bond Action rate improved slightly to 2.644% from 2.607% in the previous period while the Monthly Budget Statement for June missed expectations of a deficit of $6.35B with a deficit of $8B. 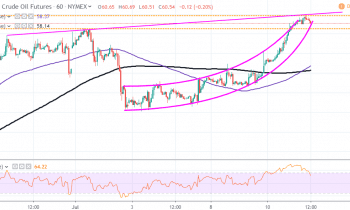 From a technical viewpoint, the price of light crude oil appears to have hit a critical trading zone after reaching the overbought levels in the Relative Strength Index recently. It now appears to be on the way back to the normal trading zone in the RSI. This explains the short-term bearish pressure. 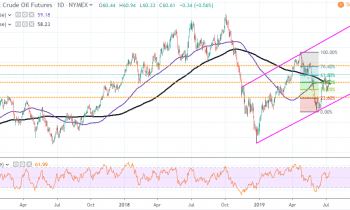 In the daily chart, the price of Light Crude Oil appears to be on a short-term rebound after a slight pullback last month. The journey back top appears to be continuing as it targets a restest of yearly highs.

In summary, the price of WTI Crude Oil appears to be under downward pressure following the latest rebound, but in the long-term, the bulls appear to be in control.