WTI crude oil continues to trend higher but is still stuck inside a rising wedge consolidation pattern. Price is testing the resistance at the moment and could be due for a break higher if bulls stay in control.

However, the 100 SMA is below the longer-term 200 SMA to indicate that the path of least resistance is to the downside. In other words, support is more likely to break than to hold. If that happens, crude oil could fall by the same height as the wedge formation, which spans $42.50 to $67.50 per barrel.

It’s worth noting that the gap between the moving averages is narrowing to reflect weaker bearish momentum and a potential bullish crossover. Crude oil is also trading above both moving averages as an indication of bullish pressure.

RSI is pointing up but hovering close to overbought conditions for quite some time. This also signals that buyers might be tired and ready to let sellers take over. Stochastic is also in the overbought region and is turning slightly south, so price might follow suit. 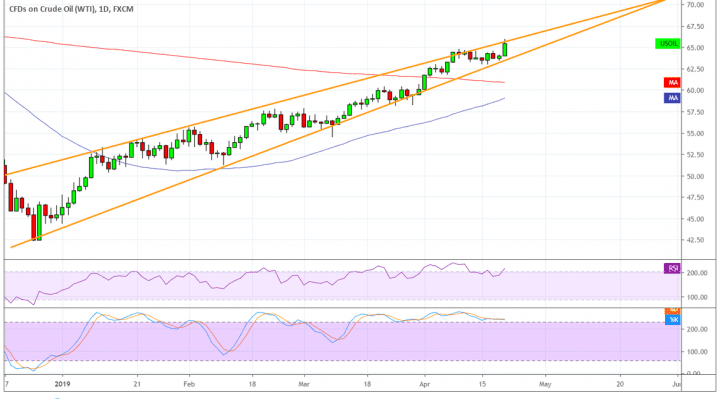 Crude oil drew yet another boost on reports that the US won’t extend its waivers on Iran sanctions. This could mean more restrictions on the country’s exports, weighing on global supply and putting further upside pressure on prices.

A source familiar with the matter was quoted by Reuters saying that the US is set to announce that all imports of Iranian oil must end or be subject to sanctions. Recall that Washington unilaterally pulled out of a 2015 nuclear accord between Iran and six world powers but granted Iran’s eight main buyers of oil waivers to the sanctions which allowed them limited purchases for half-a-year.

With that, major buyers like China and India would be forced to look for alternative sources, possibly from other members of the OPEC or the US.