WTI crude oil could be in for a reversal from its selloff as price forms a double bottom pattern on its 1-hour chart. Price is closing in on the neckline, and a break higher could set off a climb that’s the same height as the chart formation.

However, the 100 SMA is still below the 200 SMA to indicate that the path of least resistance is to the downside or that the selloff is more likely to resume than to reverse. The gap between the indicators is narrowing to signal weaker selling momentum and a possible bullish crossover. Price is also trading above the 100 SMA dynamic inflection point, so this could hold as support moving forward.

Volume has been elevated on the recent bounce and another surge in market interest could be enough to sustain a bullish neckline breakout. ADX is below 25, though, so ranging market conditions could persist. If the neckline holds as resistance, a move back to the bottoms close to $20 per barrel could follow.

Stochastic is also approaching overbought levels to show exhaustion among buyers. Turning lower could confirm that sellers are still in control. 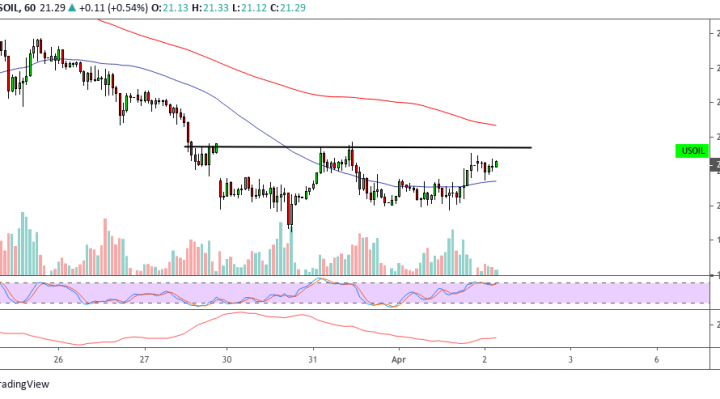 Crude oil drew a bit more support on stronger hopes that the US and Russia could talk things out and limit global oil supply, thereby lifting prices. Recall that Russia refused to cooperate with the OPEC’s proposed output deal earlier on, leading to a price war and stronger output among major oil producers.

However, risk aversion has been present in the markets again at the start of the second quarter, which suggests that previous bounces may have been from profit-taking. Demand is projected to keep weakening as an economic recession is being priced in, dampening business sentiment and consumer activity in the next few months.