WTI crude oil recently broke below the ascending trend line on its 1-hour time frame to signal that a reversal from the uptrend is due. Price seems to have completed a pullback to this broken support and might resume the slide to the next downside targets.

The 100 SMA is above the longer-term 200 SMA to indicate that the path of least resistance is to the upside. In other words, the uptrend is more likely to gain traction from here. Price found support at the 200 SMA dynamic inflection point but is below the 100 SMA to signal a bit of bearish pressure.

RSI is heading up to indicate that buyers have the upper hand, possibly taking price up for a higher pullback. Stochastic is also heading up, so price could follow suit while bullish momentum is present. 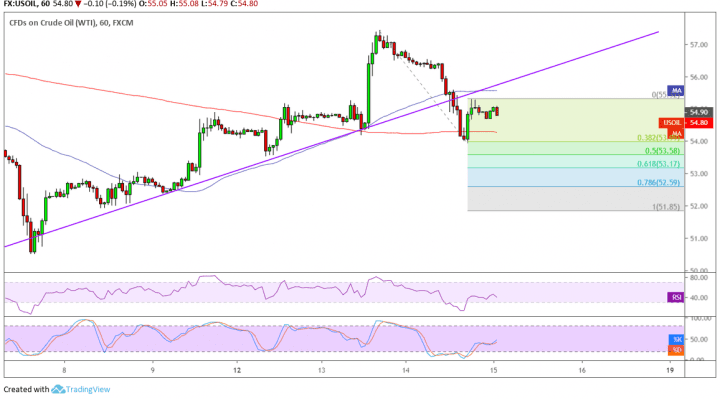 This underscores weakening business demand as trade tensions return while production likely got a big boost from the reopening of previously shutdown pipelines. Up ahead, the Baker Hughes oil rig counts could also lead to additional volatility by the end of the week.