WTI crude oil is resuming its slide on the 4-hour time frame as price bounced off the resistance at the $57.50 minor psychological mark. Price is now down to the 38.2% Fibonacci extension level and could carry on with the slide to the next downside targets.

The 100 SMA is below the longer-term 200 SMA to indicate that the path of least resistance is to the downside. In other words, the selloff is more likely to gain traction than to reverse. The 200 SMA also recently held as dynamic resistance but price is finding support at the 100 SMA for now.

RSI seems to be turning higher to reflect the presence of bullish momentum, even though oversold conditions haven’t been met. Stochastic is turning higher after recently coming close to the oversold region as well. 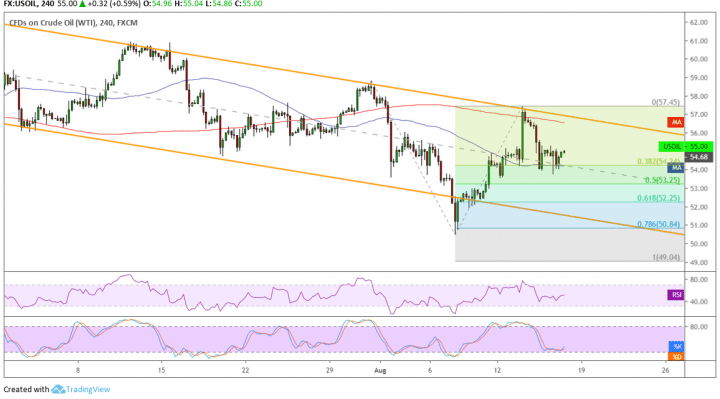 Crude oil returned some of its recent wins as both the American Petroleum Institute and Energy Information Administration reported a larger than expected gain in stockpiles. This reminded traders that demand conditions remain weak and could continue to deteriorate if the trade war worsens.

Meanwhile, downbeat data from China also suggested cooling global demand. Still, the generally positive outlook for trade talks is helping keep losses in check for the time being, although another breakdown could be in the works if the negotiations break down. On the flip side, any indication that an agreement could be struck might still yield gains for the commodity.