WTI crude oil failed in its last couple of attempts to break below the $50 per barrel mark, creating a double bottom reversal pattern on its 4-hour time frame. Price could be due to test the neckline at the $60 per barrel next.

A break past this resistance could spur a climb that’s around the same height as the chart pattern or $10. However, the 100 SMA is below the longer-term 200 SMA to indicate that the path of least resistance is to the downside or that the selloff is more likely to gain traction from here. Price is currently testing the 200 SMA dynamic inflection point that could hold as resistance.

RSI is turning lower after recently coming close to the overbought region, indicating that selling pressure could pick up. Stochastic is already on the move down to indicate that bearish momentum is in play. 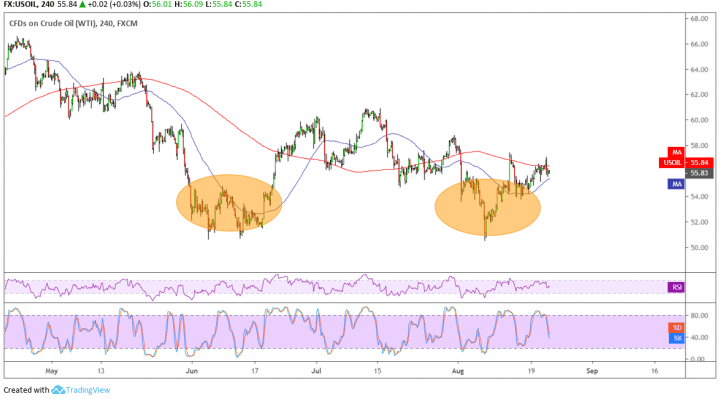 The commodity got a boost from better than expected inventory data from the Energy Information Administration. The report showed a reduction of 2.7 million barrels versus the projected drop of 1.4 million barrels. This was also better than the earlier increase of 1.6 million barrels, easing oversupply concerns.

Meanwhile, Middle East tensions remain in play, keeping the commodity supported for the time being. Note that the US has threatened to impose sanctions on whichever country assists the Iranian oil tanker that is said to be in violation of EU sanctions.

However, gains were capped as the FOMC minutes revealed that policymakers debated a larger interest rate cut in their latest meeting. This suggests that the outlook is much bleaker than anticipated, which would mean scope for even more easing measures down the line.

In turn, business outlook could be dampened and spur weaker demand for energy commodities like crude oil. Note that trade tensions remain elevated even though the US has shown signs of softening its stance on Huawei.