WTI crude oil has formed lower highs and found support around $51.15 per barrel to create a descending triangle pattern on its daily time frame. Price just broke past the triangle resistance to indicate that a rally of the same height might be in order.

The 100 SMA is below the 200 SMA, though, so the path of least resistance is to the downside. In other words, the selloff might still resume from here. Then again, price has moved above both moving averages as an early indicator of bullish momentum.

RSI is heading up and has some room to climb before reflecting overbought conditions, but the oscillator already seems to be topping out. Turning lower could show that sellers are returning and could push for a pullback to the broken triangle top or a move back inside the chart pattern.

Stochastic is also heading higher but closing in on the overbought region to reflect exhaustion among buyers. Turning lower could confirm that bearish pressure is returning. 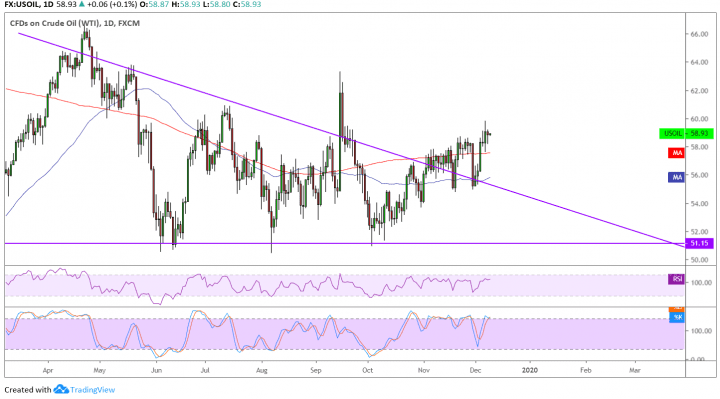 Crude oil remains supported as market participants hope to see the US refrain from imposing another set of tariffs on December 15. If so, the commodity could be in for more gains on speculations that China’s retaliatory measures on WTI crude oil could be lifted. On the other hand, pushing through with the tariffs as scheduled and escalating tensions could downplay the odds of a deal being struck soon.

For now, traders might have to wait for the next set of inventory data from the API and EIA to gauge whether a sharper rally might be in the works or if a pullback might be needed to draw more bullish energy. A large build in stockpiles could reinforce oversupply concerns and drag the commodity price down while a surprise reduction could lead to another pop higher.