WTI crude oil broke below the bottom of its rising channel support to signal that a reversal from the climb is due. Price is pulling up to the broken bottom for a retest, and holding as resistance could take it down to the Fibonacci extension levels next.

The 100 SMA is still above the 200 SMA to indicate that the path of least resistance is to the upside or that the climb is more likely to gain traction than to reverse. However, price has already broken below the 200 SMA dynamic inflection point to indicate that bearish momentum is picking up.

RSI is heading up to show that buyers are taking control while sellers take a break. Stochastic is also moving up so price might follow suit while buyers return. Both oscillators have plenty of room to climb before reaching the overbought zone, so bullish momentum could stay in play for a bit longer. 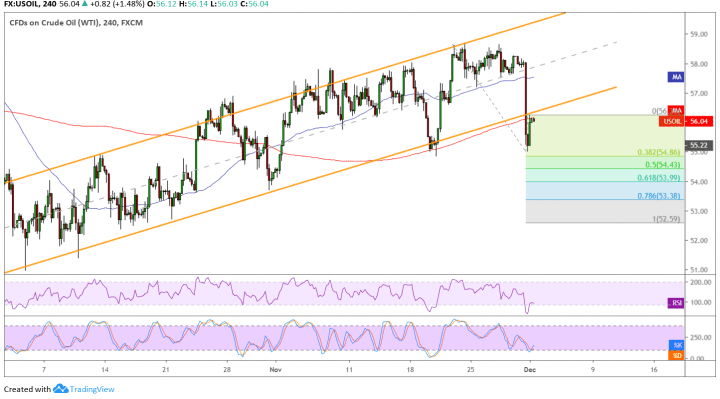 Up ahead, inventory data could determine whether or not the breakdown was a fake out or if it is an early indication that a longer-term slide is underway. A large build in stockpiles could sustain the selloff.