WTI crude oil is forming a double bottom on its short-term chart to signal that a reversal from the slide is due. Price is approaching the neckline around the $52 per barrel mark, and a break above this resistance could confirm that an uptrend would follow.

The chart pattern spans around $2.50 in height so the resulting climb could be of the same height, possibly taking price up to $54.50 per barrel next. The 100 SMA has crossed above the 200 SMA to indicate that the path of least resistance is to the upside or that the climb is more likely to gain traction from here.

Price is also moving above both indicators to confirm the presence of bullish momentum. However, RSI is turning lower without even hitting the overbought region to hint that selling pressure might still return. Stochastic is also starting to top out without reaching overbought territory, indicating that sellers might be eager to return. In that case, crude oil could head back to the lows at $49.50 per barrel again. 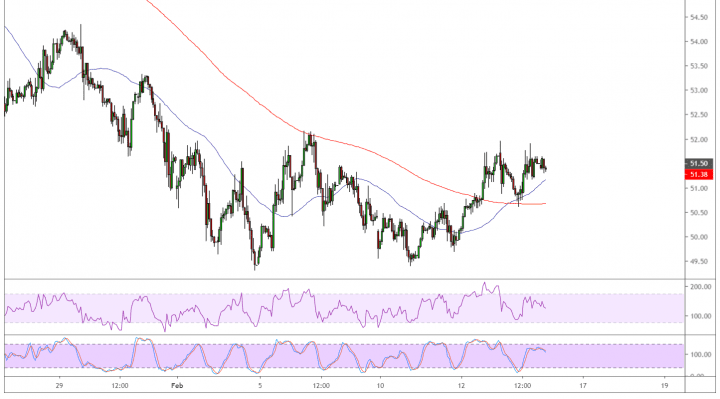 Crude oil is drawing support from the improvement in risk appetite these days, as markets remain hopeful that the coronavirus situation could be contained soon. Apart from the large jump in new cases reported on account of a new methodology for counting, it appears that traders are taking the figures in stride once more.

However, demand remains feeble as both the API and EIA reported large gains in stockpiles. On a global perspective, expectations of more output cuts from the OPEC is still supporting crude oil prices these days. Confirmation that the cartel could increase its cuts or at least extend its output agreement could lead to a lift in the commodity price, along with improving headlines on the coronavirus outbreak.