WTI crude oil continues to trend higher inside its ascending channel on the 4-hour time frame but may be attempting to break below support. If the channel bottom holds, a bounce to the Fibonacci extension levels might be next.

The 100 SMA is still above the 200 SMA to confirm that the path of least resistance is to the upside or that the uptrend is more likely to gain traction than to reverse. The 200 SMA lines up with the channel bottom to add to its strength as a floor, but price appears to be attempting a break below it.

RSI is already indicating oversold conditions, though, so sellers could be exhausted and willing to take a break. Turning higher could confirm that buyers are taking over. Stochastic is also in the oversold region and this oscillator is already starting to pull up to reflect a return in bullish momentum. Still, a move below the lows around $58 per barrel could set off a reversal from the climb. 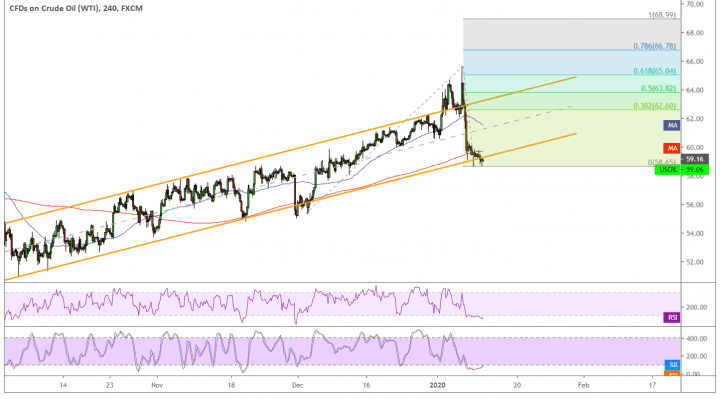 Crude oil drew a strong boost from escalating tensions in the Middle East as this prompted speculations of more sanctions and restrictions on the country’s oil industry. In turn, this would dampen global demand, adding to the impact of OPEC output cuts.

However, easing tensions spurred a bout of profit-taking around the middle of the previous week. Traders continue to keep close tabs on news and inventory data to gauge whether or not the uptrend is likely to carry on.