WTI crude oil broke out of its descending triangle pattern on the daily time frame to signal that an uptrend of the same height might follow. Price could also find resistance at the nearby resistance levels marked by the Fibonacci extension tool.

The 100 SMA just crossed above the longer-term 200 SMA to indicate that the path of least resistance is to the upside or that support is more likely to hold than to break. The moving averages seem to be holding as dynamic support levels as well, but a break below this could mean a move to the triangle support once more.

RSI is heading lower to show that sellers have the upper hand could push for more losses. Stochastic is also heading lower but already dipping in the oversold region to signal exhaustion among bears. Turning back up could bring buyers back in the game and take crude oil up to the nearby upside targets. 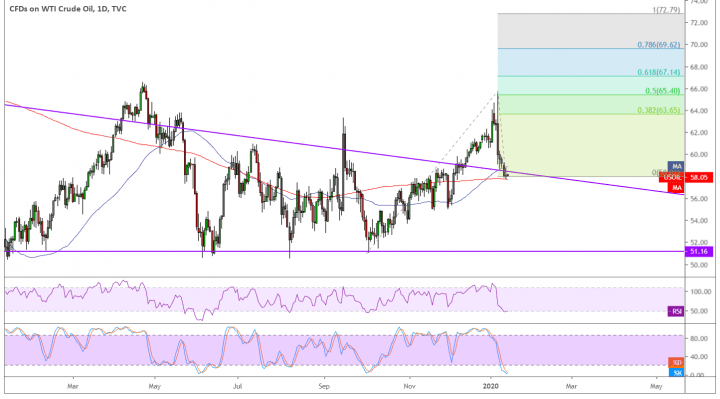 Crude oil is still under weak footing after strong profit-taking activity ensued on calming tensions between the US and Iran. Sanctions might still be in the works, though, as US President Trump hinted at in his speeches. In that case, global crude oil supply might take hits and put upside pressure on prices.

Up ahead, inventory data from the API and EIA could determine where crude oil prices are headed next. Large draws could lift prices while a surprise build could put more downside pressure on the commodity.