WTI crude oil seems to be pulling up from its recent slide as price bounced off the $54.70 per barrel level. The Fibonacci retracement tool shows where the nearby resistance levels are located.

The 100 SMA is below the 200 SMA to indicate that the path of least resistance is to the downside or that the selloff is more likely to resume than to reverse. The gap between the indicators is widening to reflect stronger bearish momentum as well.

The nearest resistance at the 38.2% Fib lines up with the 100 SMA dynamic resistance to add to its strength as a ceiling. A larger pullback could last until the 50% Fib at $57.15 per barrel or the 61.8% level that lines up with a former support level and the 200 SMA dynamic inflection point. This is also close to a falling trend line connecting the recent highs.

RSI is still moving up to show that there is some bullish momentum in play that could keep the correction going. Stochastic is also heading up so price might follow suit, but the oscillator is already approaching the overbought zone to suggest that buyers might be exhausted soon. Turning lower could indicate that bearish momentum is about to kick in. 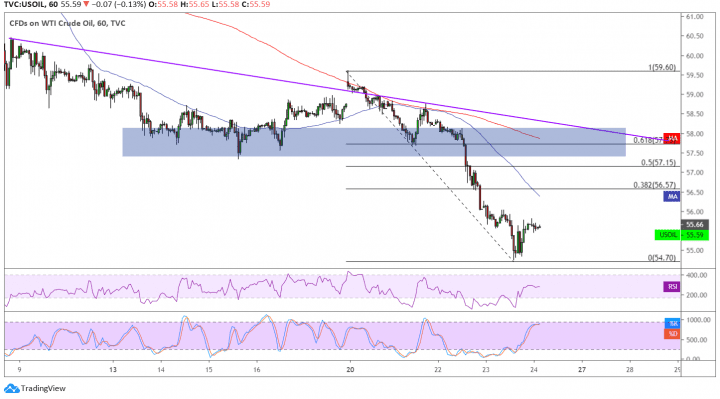 Crude oil barely drew any support from the inventory data from the Department of Energy that reflected a modest crude oil inventory draw of 400,000 barrels for the week to January 17. This was smaller than analyst expectations of a 1.117-million-barrel inventory decline and a draw of 2.5 million barrels reported a week earlier.

It appears that overall risk aversion in the markets stemming from the virus in China is also dragging commodities south. A couple of cities have already been quarantined, leading many to predict that it could take a huge chunk off overall growth and keep weighing on sentiment.