WTI crude oil continues to trend higher as it made another bounce off the rising channel visible on the 4-hour chart. Price is once again testing the resistance at the mid-channel area of interest.

This lines up with the 38.2% Fibonacci extension level, which is likely the first take-profit point for buyers. Stronger bullish momentum could take crude oil up to the next upside target at the 50% level or $40.75 per barrel. Sustained buying pressure could allow it to reach the 61.8% level that lines up with the swing high at $41.60 per barrel or the 78.6% level at $42.82 per barrel.

The 100 SMA is above the 200 SMA to confirm that the path of least resistance is to the upside or that the climb is more likely to gain traction than to reverse. The gap between the indicators is narrowing, though, so bullish momentum could slow down soon. For now, the 100 SMA is holding as dynamic support and the 200 SMA could do so around the $36 per barrel mark as well.

RSI is moving north, so price could follow suit while bullish momentum is present. However, the oscillator is closing in on the overbought zone to signal exhaustion, and turning lower could indicate that sellers are ready to return and push price back to support around $38 per barrel.

Stochastic is already in the overbought zone to reflect exhaustion among buyers and a likely return in selling pressure. 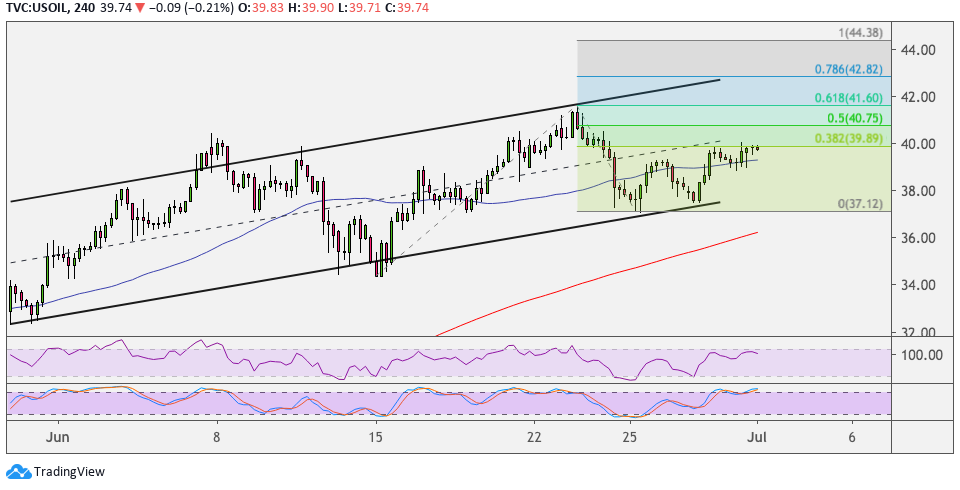 Crude oil recovered slightly as risk sentiment improved at the start of the week. However, the upcoming inventory data from the Energy Information Administration could still bring in additional volatility as a draw in stockpiles of 0.9 million barrels is eyed.

This would reflect a change in demand, considering that the previous report showed a build of 1.4 million barrels. Of course the NFP release on Friday could also usher in big moves for commodities.