WTI crude oil could be due for a reversal from its downtrend as it formed and confirmed an inverse head and shoulders pattern on the 4-hour time frame. Price broke past the neckline to show that a climb of the same height as the formation is due.

The 100 SMA is above the longer-term 200 SMA to indicate that the path of least resistance is to the upside. In other words, the uptrend is more likely to gain traction than to reverse. 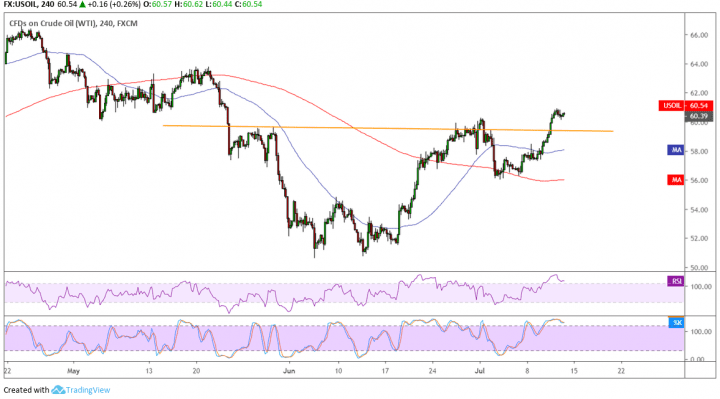 Earlier in the week, the EIA reported that crude oil stockpiles fell by 9.5 million barrels versus the expected drop of 1.9 million barrels and the earlier reduction 1.1 million barrels. Traders are likely to take cues from the Baker Hughes oil rig counts next as a large increase could revive oversupply concerns.

Meanwhile, the FOMC minutes also boosted the commodity as policymakers hinted of the possibility of an interest rate cut. This confirmed speculations that, even though some reports recently surprised to the upside, there’s no denying that there have been signs of a slowdown and that further deterioration would warrant more stimulus.

Another factor keeping crude oil supported is the extension of the OPEC output deal by nine months versus the expected six-month extension. This could keep a lid on global oversupply concerns until the end of the year to early next year, likely propping crude oil prices higher from here.