WTI crude oil has formed higher lows and slightly higher highs to consolidate inside a rising wedge formation. Price has once again bounced off support and is making its way to the top around $41.50 per barrel.

The 100 SMA is above the 200 SMA to indicate that the path of least resistance is to the upside or that resistance is more likely to break than to hold. In that case, crude oil could enjoy a rally that’s at least the same height as the chart formation. The gap between the moving averages is also widening to reflect stronger bullish momentum.

RSI is already indicating overbought conditions to show that buyers are exhausted and that sellers could take over. Stochastic is in the overbought region as well, and turning lower could mean that bearish momentum is about to pick up.

If that happens, crude oil could retreat to the wedge support around $40.50 per barrel. A break below this could set off a slide that’s at least the same size as the chart pattern. 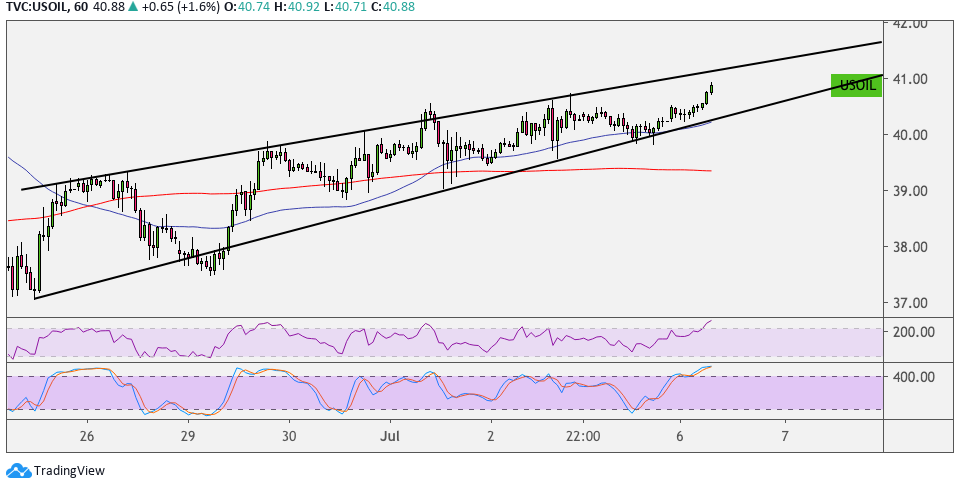 Crude oil enjoyed a pop higher last week when the US printed stronger than expected June NFP data. The May figure also enjoyed a positive revision, adding to traders’ appetite for riskier assets.

This increase in hiring could mean stronger business and consumer spending down the line, which would be positive for commodities and overall market sentiment. However, fears of a second wave of the pandemic could keep gains in check.

The upcoming API and EIA data on crude oil stockpiles could determine where the commodity would likely break out or if the consolidation could simply carry on. A large build in stockpiles would reflect weak demand, which would mean more downside for the commodity, while a surprise draw could spur more upside.