WTI crude oil has been on the decline but appears to be finding strong support at this area of interest. If so, price could recover to the swing high around $66.60 per barrel and beyond.

Price is finding support at the 61.8% Fib that lines up with a former support level. If this is enough to keep losses in check, price could confirm the reversal from the previous downtrend.

The 100 SMA crossed above the longer-term 200 SMA to indicate that the path of least resistance is to the upside or that the climb is more likely to gain traction than to reverse. However, the gap between the indicators is still pretty narrow and there could still be a chance of a bearish crossover.

RSI is turning higher from the oversold region to indicate a return in bullish pressure. This oscillator has plenty of room to climb before reaching the overbought zone to signal exhaustion. Stochastic is also just making its way out of the oversold region to indicate that bullish momentum is returning. A break below the 61.8% Fib, however, could set off a drop until the swing low at $42 per barrel. 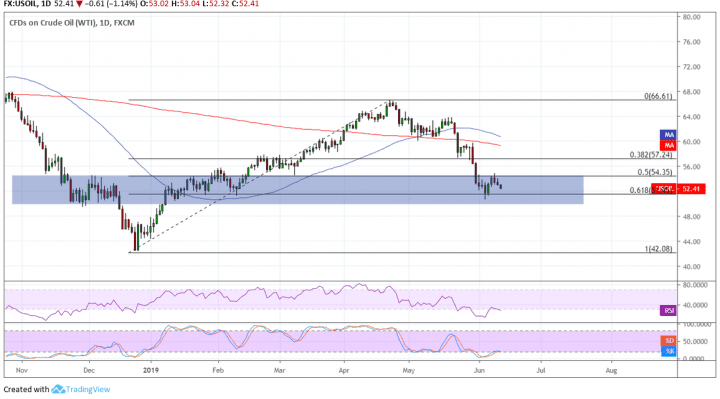 Crude oil had a bit of a reprieve from its slide when speculations about an extension of the OPEC output deal picked up late last week. This time, traders might be pricing in another buildup in stockpiles as reported by the API or EIA.

If so, the commodity could be in for further declines as oversupply fears return. Business outlook has already weakened on account of trade tensions between the US and China, and this is already weighing on the demand side of the equation, as well as risk appetite. On the other hand, a large draw in stockpiles could allow prices to stay afloat.