WTI crude oil formed lower highs and higher lows to consolidate inside a symmetrical triangle pattern on its short-term time frame, and price has recently broken to the upside.

This suggests that a rally of the same height as the chart pattern could be underway. The triangle spans $36.50 per barrel to $38.50 per barrel, so the resulting climb could be roughly $2.

The 100 SMA is above the 200 SMA to confirm that the climb is more likely to gain traction than to reverse. The gap between the indicators is also widening to signal strengthening bullish momentum, and the 100 SMA lines up with the broken triangle top to add to its strength as support in a pullback.

RSI has been hovering around the overbought zone for quite some time to indicate that buyers could use a break and let sellers take over. This might happen as soon as the oscillator starts heading lower to reflect a pickup in bearish momentum. Stochastic has been indicating overbought conditions for quite some time as well, so buyers could allow sellers to regain the upper hand. 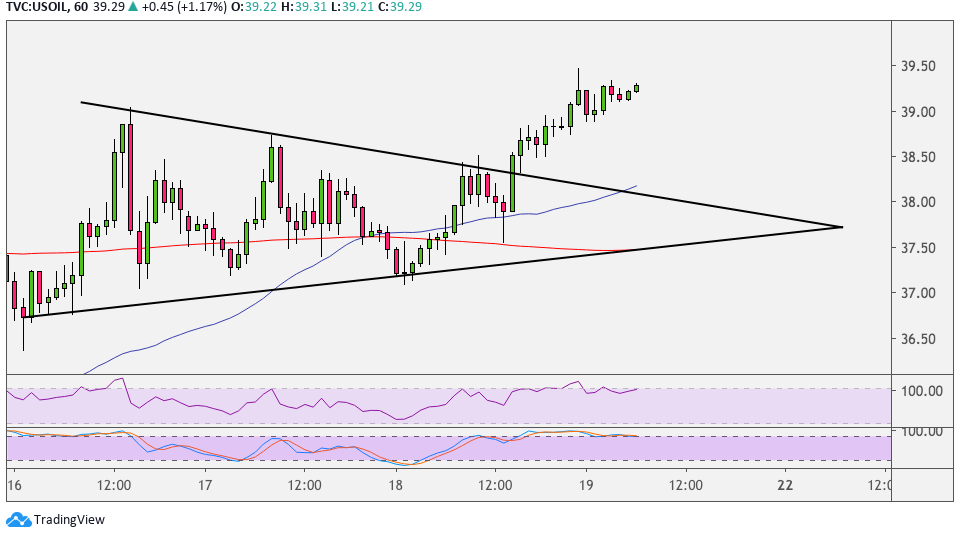 Crude oil enjoyed quite a rally as the OPEC remained committed to its output cuts, even though the price of the commodity has already staged a rebound off its lows this year. Recall that crude oil dipped to negative levels a few months back on a combination of weak demand and oversupply concerns, as well as futures contract expiry.

Optimism that more states and nations could reopen from their lockdowns soon is lifting price forecasts, but fears of a second wave of the pandemic could keep gains in check. After all, business and consumer activity have yet to pick up, and it doesn’t help that geopolitical tensions might hamper the resumption of trade and travel services.