WTI crude oil might still be in for a reversal from its slide as price continues to make headway towards testing the neckline of its double bottom. A break above the resistance around $29 per barrel could set off a rally that’s the same height as the chart formation.

However, price is still below the 200 SMA to signal that the path of least resistance is to the downside or that the selloff is more likely to resume than to reverse. The moving average might also hold as dynamic resistance before crude oil even tests the neckline.

RSI is already starting to turn lower without even reaching the overbought zone, suggesting that sellers are eager to return. Stochastic has some room to climb before reflecting overbought conditions, so there may still be a bit of bullish pressure left. Turning lower could push crude oil back to the lows around $21 per barrel or lower. 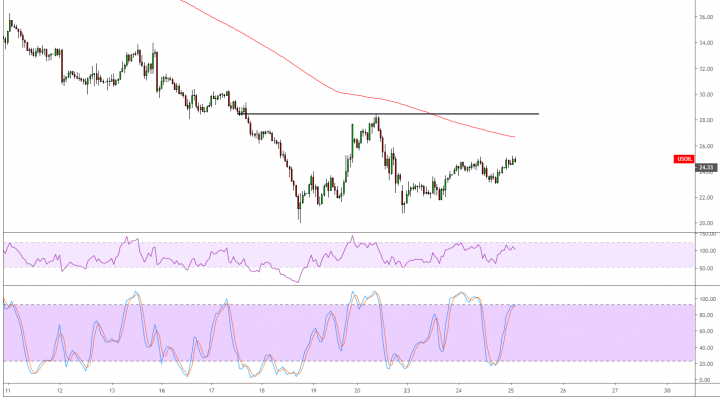 More countries and U.S. states have announced lock downs, which further curbs travel and trade activity. In turn, this hurts demand for fuel and energy commodities like crude oil.

Also note that India, which has one of the largest populations on the globe, is under nationwide lock down so a huge dent to overall economic activity is expected. This likely weighs on overall business sentiment and risk appetite, putting additional drag on higher-yielding assets like commodities.

Still, traders are waiting on the coronavirus aid package to be voted on by the U.S. Congress as this is expected to bring a temporary boost to businesses. If the stimulus is enough to revive risk taking, a rally in crude oil could be sustained at least until the end of the week.