WTI crude oil has formed lower highs and higher lows to consolidate inside a symmetrical triangle on its 1-hour chart. Price is approaching the peak of the formation to signal that a breakout might happen soon.

The 100 SMA is below the 200 SMA to indicate that the path of least resistance is to the downside or that support is more likely to break than to hold. If so, price could fall by the same height as the triangle, which spans around $20 to $30 per barrel. Similarly, a break above the triangle top could set off a climb of the same size, although crude oil would need to move past the 200 SMA dynamic resistance to sustain the rally.

RSI is heading south so price could follow suit while sellers have the upper hand. The oscillator didn’t even make it to the overbought zone to reflect exhaustion among buyers, which suggests that bears are eager to take over. Stochastic turned lower upon reaching the overbought zone, indicating that bearish pressure is building up. 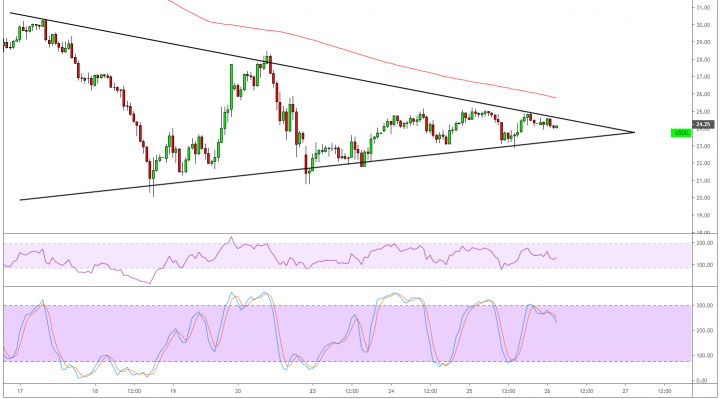 To top it off, weak risk appetite is also dampening demand for risk assets like stocks and commodities. After all, worsening coronavirus cases could mean more trade and travel restrictions that would curtail demand for energy and fuel, not to mention dampen business and consumer activity.

Traders are also waiting on the OPEC for a coordinated effort to limit the price slide, but it seems that talks aren’t bearing much fruit.