WTI crude oil broke below the bottom of its descending channel on the 1-hour time frame to confirm that a continuation of the longer-term drop is due. Price gapped down over the weekend as an indication of strong selling pressure.

The 100 SMA is below the 200 SMA to indicate that the path of least resistance is to the downside or that the selloff is more likely to gain traction than to reverse. The 100 SMA also lines up with the triangle top to add to its strength as a ceiling in the event of a pullback.

RSI is pulling up after recently dipping to the oversold region to signal a return in bullish pressure. Stochastic is also turning higher to show that buyers are returning from here. With that, the weekend gap could still get filled or a higher correction might follow. 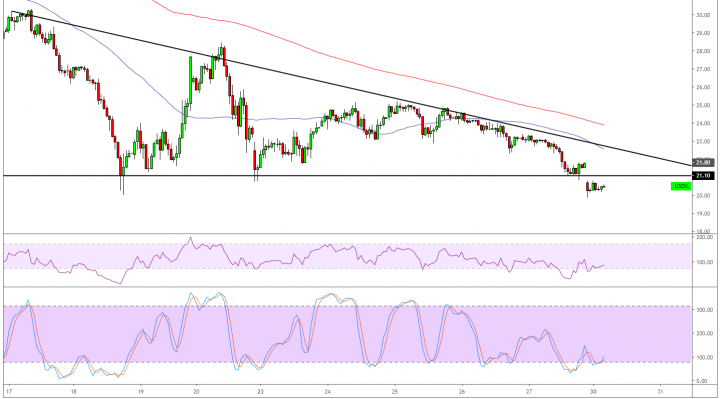 Crude oil is still on weak footing as more headlines the COVID-19 outbreak continues to paint a grim picture for commodities. More and more confirmed cases and fatalities are being reported, which could mean an extension of the lock downs already in place in several nations. In turn, this would keep fuel and energy demand in check while trade and travel restrictions are imposed.

Major oil producers are also unable to come up with any agreement to trim output in order to keep prices supported. Note that any attempt to limit production must be a coordinated effort, otherwise a price war could ensue.

Above all, overall risk sentiment remains negative, which signals further losses for higher-yielding assets like stocks and commodities, even as governments have made massive stimulus efforts. Barring any major changes in risk appetite or moves by major oil producers to keep output in check, crude oil might see further downside from here.