WTI crude oil might be in for a pullback after its recent upside break from the $32.50 minor psych0logical mark. Applying the Fibonacci retracement tool shows where more buyers might be waiting.

On the subject of moving averages, the 100 SMA is above the longer-term 200 SMA to confirm that the path of least resistance is to the upside. In other words, the uptrend is more likely to resume than to reverse. The gap between the indicators is also widening to reflect strengthening bullish pressure.

RSI has been indicating overbought conditions for quite some time, which means that buyers have been exhausted and waiting for sellers to take over. Stochastic is also in the overbought territory and turning lower could confirm that bearish pressure is picking up. 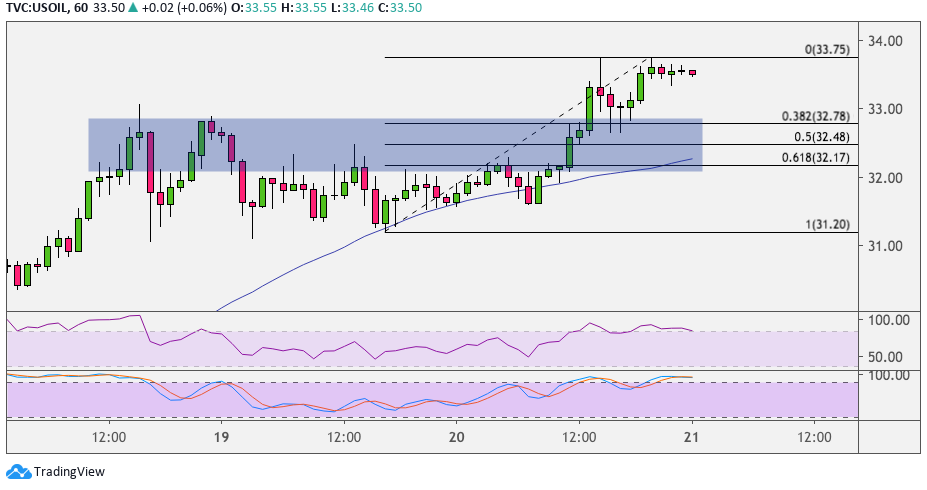 Crude oil is enjoying some support from hopes that a vaccine for the COVID-19 could be developed soon or that more states could reopen and resume normal business and consumer activity.

The EIA crude oil inventories report revealed a drop of 5.8 million barrels versus the expected increase of 1.7 million barrels and the earlier dip of 0.7 million barrels. This suggests even stronger demand for the commodity, possibly as purchases of fuel and energy are picking up or producers pumped less oil.

Up ahead, Baker Hughes oil rig count data could also impact crude oil price action over the weekend and onto the following week. A reduction could signal subdued purchases, which might spur another dip in prices.