WTI crude oil could be in for a reversal from its climb as price formed a double top pattern and is gearing up for a break below support around $31.40 per barrel.

If so, price could be in for a slide that’s around the same height as the chart formation. However, the 100 SMA is still above the 200 SMA to indicate that the path of least resistance is to the upside or that support is more likely to hold than to break. In that case, price could recover to the tops just past the $34 per barrel level.

Then again, the gap between the indicators is narrowing to reflect weakening bullish momentum and hint at a potential bearish crossover. Price is also moving below both moving averages as an early indicator of selling momentum.

RSI is turning higher after dipping to the oversold region to signal a possible bounce while stochastic also looks ready to move north, so price could follow suit. 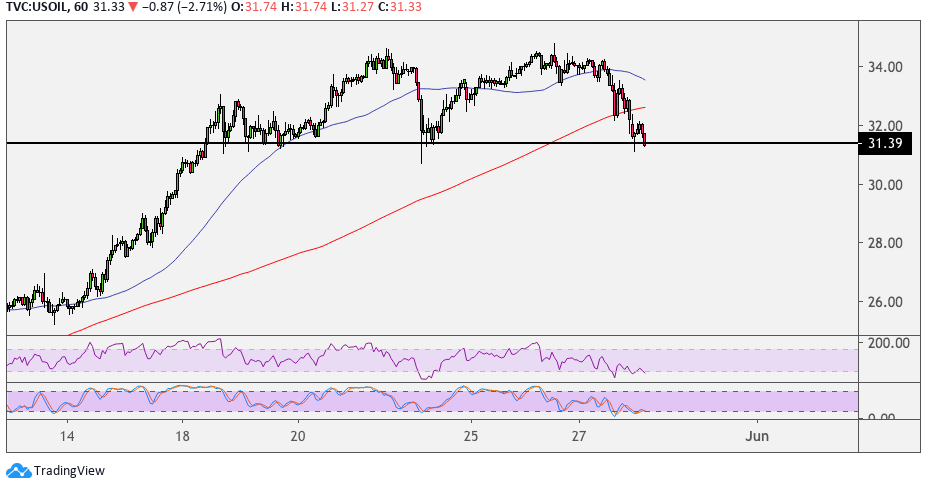 Crude oil is on weak footing as the expiry of the June futures contracts draws near. Note that the commodity slumped to subzero territory a few months back when demand was nearly non-existent and oversupply became a big concern.

A bit of optimism has returned to the markets these days, though, as lockdown measures are being eased in several parts of the world. This could revive trade and travel activity, which would boost demand for fuel and energy commodities.

The rebound in risk appetite has also provided some support for crude oil as business and consumer activity could enjoy a rebound. Inventory data over the past weeks have already reflected some pickup in demand, although traders might continue to tread carefully from here.