WTI crude oil is trending higher on its 4-hour time frame as it continues to move inside a rising channel and test the mid-channel area of interest. Price might be able to bounce back to the next upside targets marked by the Fibonacci extension tool.

Price already hit resistance at the 50% extension but could still keep up the climb to the to top of the channel that lines up with the 61.8% extension. Stronger bullish momentum could take it up to the 78.6% extension at $59 per barrel or the full extension closer to the $60 per barrel major psychological mark.

The 100 SMA is above the 200 SMA to indicate that the path of least resistance is to the upside or that the climb is more likely to gain traction than to reverse. The gap between the indicators is widening to reflect increased bullish momentum as well, and the 100 SMA is currently holding as dynamic support.

RSI is treading sideways to reflect consolidation action while stochastic still seems to have room to head north. Turning lower, however, could suggest that sellers are taking over and that a deeper pullback to the channel bottom around $55 per barrel is in order. 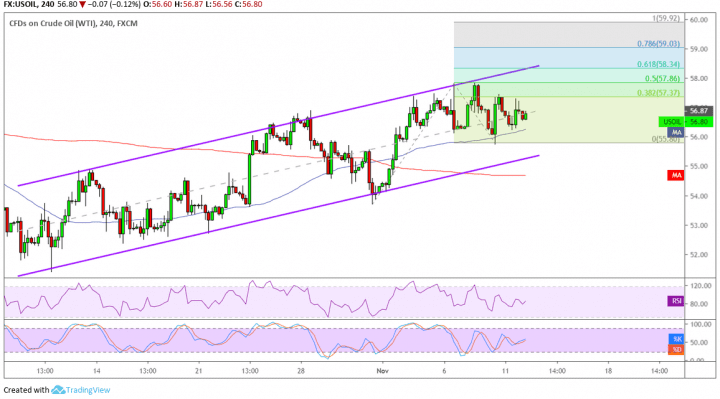 Crude oil was off to a weak start for the week as doubts that the US-China trade deal could materialize weighed on riskier assets. Still, prices seem to be stabilizing as there have been no major flares in negotiations so far.

The prospect of an actual agreement being signed is lifting hopes that the tariffs on WTI crude oil could be lifted, thereby resulting in a strong surge in global demand. For now, traders remain wary that supply levels could remain elevated, and the upcoming inventory reports from the API and EIA could confirm that.