WTI crude oil is trading sideways as it bounced off support around $56.25 per barrel and is currently attempting to break above the resistance at $57.45 per barrel. Technical indicators are giving mixed signals on whether or not a breakout could materialize.

The 100 SMA is still above the 200 SMA to indicate that the path of least resistance is to the upside or that resistance is more likely to break than to hold. In that case, crude oil could be in for a climb that’s around the same height as the range, which spans around $1.20 in height. However, the gap between the indicators is narrowing to reflect weakening bullish momentum, even as price is trading above both moving averages.

RSI has been indicating overbought conditions for quite some time and might be due to turn lower to signal a return in selling pressure. Similarly stochastic is also in the overbought zone and might be heading south, so price could follow suit and revisit the range support. 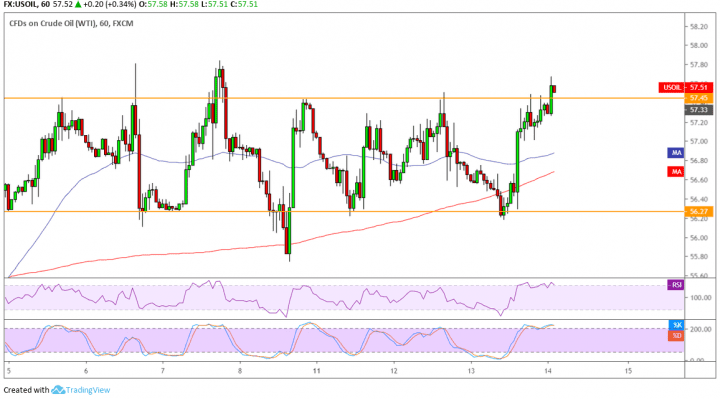 In addition, OPEC Chief Mohammed Barkindo suggested that US shale supply growth might slow next year, which could mean more upside pressure on prices. Still, the commodity seems to be treading carefully as traders are keeping close tabs on trade talks between the US and China. After all, WTI crude oil is part of the products targeted in Chinese retaliatory measures, so the prospect of lifting those tariffs might also be bullish for the commodity.