WTI crude oil has formed higher lows and higher highs to trade higher inside an ascending channel on its 1-hour time frame. Price is bouncing off support and could be due for a move back up to the resistance again.

The 100 SMA is still above the 200 SMA to indicate that the path of least resistance is to the upside. In other words, the uptrend is more likely to gain traction than to reverse. However, the gap between the indicators seems to be slowly narrowing to reflect weaker bullish momentum.

RSI is pulling up from the oversold region to signal that buyers have taken over while sellers are exhausted, but the indicator is starting to turn lower again. Stochastic is also moving higher to show that bullish momentum is picking up and might be enough to take crude oil up to the top of the channel around $58 per barrel or at least until the mid-channel area of interest at $57.50 per barrel. 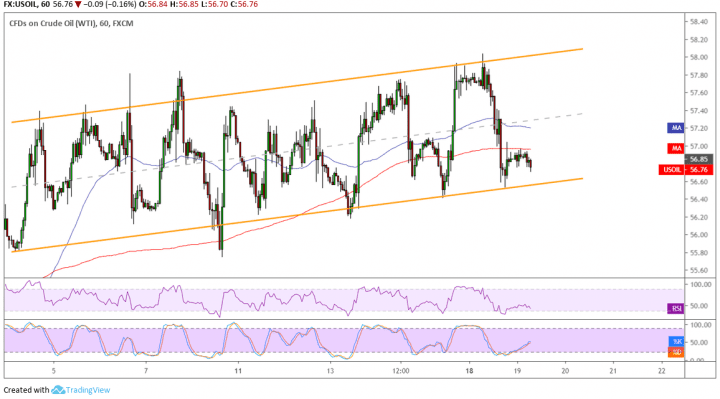 Crude oil suffered a selloff and remains on weak footing on the lack of developments in US-China trade talks. Traders had already been optimistic about a deal being struck before the end of the month, but skepticism has taken over now that a lot of uncertainties remain. Worsening tensions or a prolonged impasse could continue to drag commodity prices south as this would dampen business optimism.

Up next, traders could take cues from inventory data from the American Petroleum Institute and Energy Information Administration next. The EIA report previously showed a build of 2.2 million barrels so another increase could weigh on prices once more. On the other hand, a draw could signal that demand remains healthy and that there is no immediate threat of oversupply, likely lifting prices again.