WTI crude oil is still heading up but testing an area of interest at the middle of its range on the daily time frame. If this holds as resistance, price could dip back to support around $51 per barrel next.

The 100 SMA is below the longer-term 200 SMA to indicate that the path of least resistance is to the downside or that resistance is more likely to hold than to break. The 200 SMA is also holding as dynamic resistance as well. A move past these levels could pave the way for a rally up to the $61 per barrel mark. 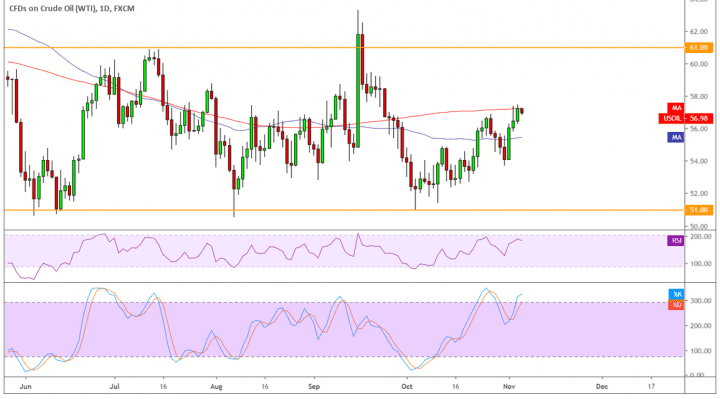 The upcoming release of inventory data this week could determine whether or not the near-term area of interest would hold as resistance. A large increase in stockpiles would reflect weak demand and weigh on prices while a draw could signal that demand remains healthy.

The commodity is drawing some support from hopes that the US and China could strike a trade deal before the end of this month, possibly even lifting the measures on WTI crude oil at some point. So far negotiations are proceeding well, but any sign of escalating tension could force the commodity to return its recent gains.

Risk appetite has generally been in play over the past weeks as geopolitical concerns are fading. Central banks are also shifting to more dovish stances, which would be supportive of business and consumer spending down the line, thereby driving up demand for energy commodities.